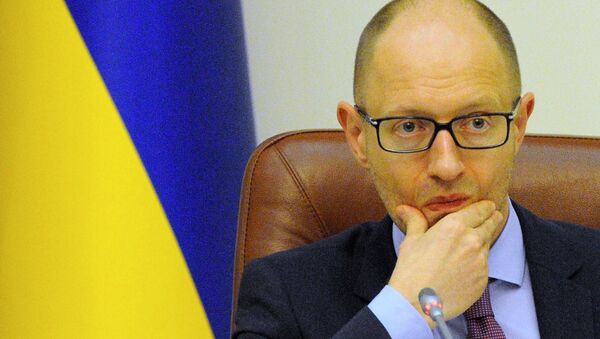 © RIA Novosti . Alexandr Maksimenko
/
Go to the photo bank
Subscribe
Ukraine is ready to sign a temporary gas agreement with Russia, the final price and supply conditions will be set by the courts, Ukrainian prime minister Arseniy Yatsenyuk said Tuesday.

“We are ready to sign – I highlight this – a temporary deal. The final decision on the price and on the delivery conditions will be determined by a court,” Yatsenyuk was quoted as saying by Ukraine’s government portal.

Yatsenyuk reminded that in order to sign the temporary agreement the Ukrainian government had accumulated 3.1 billion dollars.

Yatsenyuk also stated that another possible way to resolve the gas dispute is to get an interim juridical decision from Stockholm’s arbitration, which will determine the price for gas, as well as the conditions of supply.

“Until there are signatures and an agreement, it is too soon to talk about any sort of solution to the gas dispute,” he added.

In June, Russia's energy giant Gazprom was forced to introduce a prepayment system for gas deliveries to Ukraine due to Kiev's massive debt which is currently estimated at $5.3 billion.

Last week, after the meeting in Milan, Russian Energy Minister Alexander Novak confirmed that Moscow and Kiev have resolved in principle all the key controversial issues concerning Russian gas supplies to Ukraine during the upcoming winter season.

The energy minister confirmed that Ukraine had agreed to pay $385 per 1,000 cubic meters of Russian gas during the winter months.

According to Novak, the only unresolved issue left was Ukraine’s ability to find financing for the debt payoff and to ensure future payments on time.