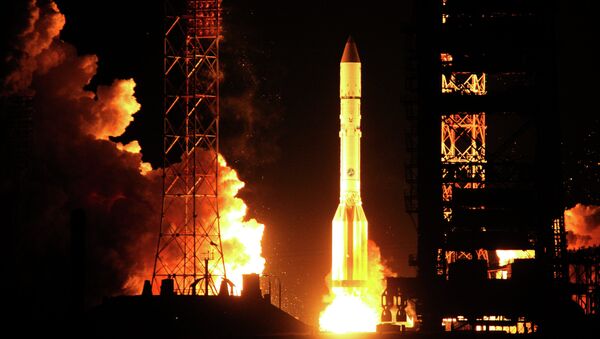 The launched communications satellite will have an active lifespan of 15 years and will be operated by the Russian Satellite Communications Company.

Based on the heavy-class Express-2000 platform, the spacecraft will have an active lifespan of 15 years and carry 11 antennas as well as 72 C-, Ku-, Ka- и L-band transponders, according to Russia's Reshetnev Company, which designs and builds Express-series satellites.

This is the second launch of the Proton-M carrier rocket since the major accident that took place in May 2014. Launched from Baikonur, the Proton-M rocket burned up in the atmosphere above China, leaving Russia without its most powerful telecommunications satellite. The investigation has concluded that the crash was caused by a failure of a turbo-pump bearing in the control engine of the rocket's third stage.

The Proton-M is the largest carrier rocket in Russia's fleet of space launch vehicles. Since its first launch in 2001, Proton has put dozens of Russian and foreign satellites into orbit.