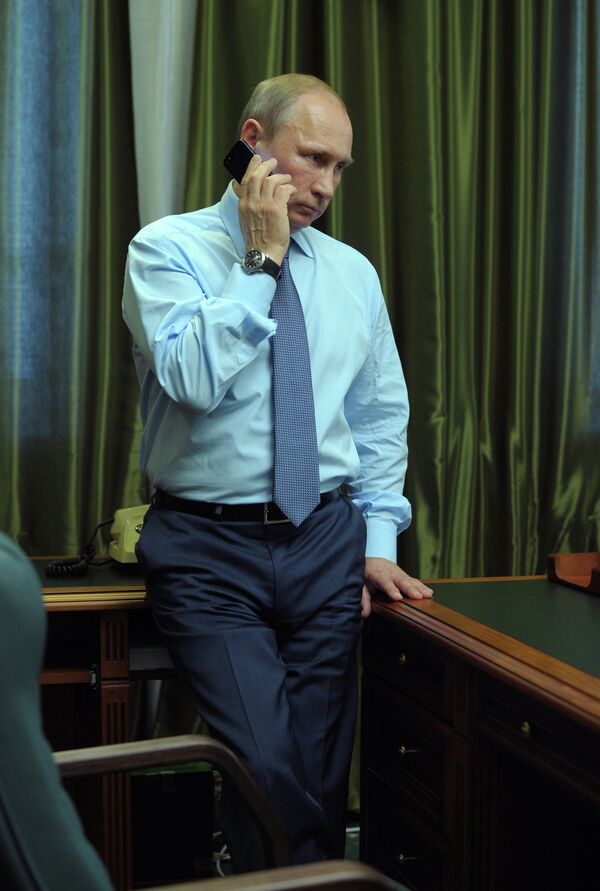 © RIA Novosti . Alexey Druzhinin
/
Go to the photo bank
Subscribe
The Falcon 50 business jet carrying Christophe de Margerie as the only passenger hit a snow removal vehicle during takeoff at the Vnukovo-3 Airport in Moscow late on Monday night, killing the head of France's Total along with three crew members that were also on board.

“Please convey my sincerest condolences and sympathy to the family and friends of Christophe de Margerie - a prominent French businessman who pioneered many of the major joint projects, which laid the foundation for many years of fruitful cooperation between France and Russia in the energy sector … We have lost a true friend of our country and his legacy will remain with us,” said the telegram Putin has sent to Hollande, according to Kremlin.

Earlier in the day, Hollande expressed his condolences over Margerie’s death.

French Prime Minister Manuel Valls said in a statement that the country has lost "a great industry captain" who turned Total into a world giant. Former Finance Minister Alexei Kudrin said that de Margerie "did a lot to attract investments to Russia."

Eric Kraus, Director at Principal Asset Management, an advisory company in Moscow, has also noted that de Margerie was a close friend to Russia, even though he was legally constrained by the sanctions and by European law.

Eric Kraus said that although Christophe de Margerie’s death won’t have an immediate effect on the activity of Total in Russia, it will hit the company negatively in the long run.

“Leaving the politics aside for a moment, Russia is one of the few geopolitically safe places where one can still find oil reserves which are not extremely challenging geologically,” he told Radio VR. “So, having a close relationship with the Russian oil and gas world was very valuable to Total.”

The Falcon 50 business jet crashed late Monday night at the Vnukovo-3 Airport in Moscow after the aircraft hit a snow removal vehicle on takeoff. The aircraft was flying from Moscow to Paris with de Margerie as the only passenger on board besides three crew members, also French citizens. All four people died in the crash.

Four theories as to the cause of the accident are currently being investigated - a mistake by air traffic control, the actions of the snowplow driver, bad weather conditions and the possibility of a mistake by the pilot.

De Margerie was born in 1951. He joined Total in 1974 after graduating from the Ecole Superieure de Commerce in Paris. He served in several positions in the Finance Department and the Exploration & Production division. In May 2006, he was appointed to the company’s board of directors. He became chief executive of Total on February 14, 2007. Since May 2010, he served as chairman of the company.