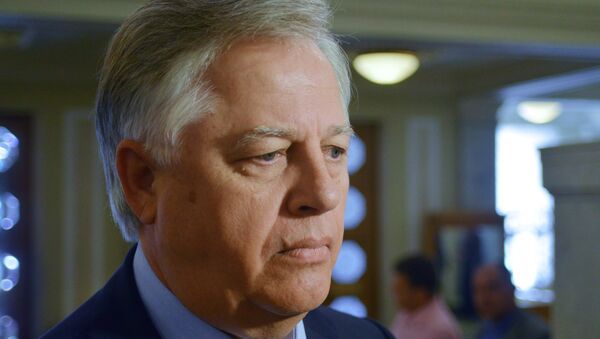 The Communist Party of Ukraine (KPU) may not pass the five percent threshold necessary for entry into the country’s new parliament following the upcoming vote, Agence France-Press reports.

According to the opinion of the Ukrainian sociological polling group “Rating”, polls which were conducted October 13 show that support for the KPU has fallen to 4.5 percent, which would put them below the minimum five percent necessary to be represented among the parliament’s 225 deputies who are elected via proportional representation. The country’s impromptu parliamentary elections are set to take place on October 26.

In the 2012 parliamentary elections, the KPU received 13 percent of the vote, granting them 32 seats among the country’s 450 seat parliament, the Verkhovna Rada. The party gained all of its present mandates via seats reserved for proportional representation.

The communists’ leader, Petro Symonenko, attributes his party’s decline to an “unprecedented wave of anti-communist psychosis” around the country, noting on the party’s website that attacks are not confined to the party, but also to the symbols associated with the country’s communist past, including monuments to Lenin, and symbols associated with the Soviet Union’s victory over the Nazis in the Second World War.

Two more statues in the eastern region of Kharkiv were demolished last month, one in the city of Kharkiv on the order of the region’s governor.

Regional leaders of traditional party strongholds in eastern Ukraine have noted that the party faces attacks and threats from football hooligans and masked men in army fatigues, Agence France-Press notes.

Zaporozhia’s party leader Aleksei Baburin notes that “attempts to hold a normal campaign are met with aggression,” limiting the party to activities like “door-to-door campaigning.” He also noted that voters are intimated and “afraid to talk about who they will vote for,” giving him hope that the party’s real level of support is higher than the polls may show, AFP quotes him as saying.

The KPU has been severely criticized by opponents for being one of main political forces in the country to encourage establishing a dialogue and cooperation with Russia. The party has been charged with supporting separatists in southeastern Ukraine, as well as the Crimea referendum, which saw that region break away from Ukraine and join Russia.

Symonenko told the French communist newspaper L’Humanite back in June that while his party supports territorial integrity, it also supports the principle of regional referendums which allow people to use “their constitutional rights to defend their own interests.” He also said that the Kiev regime was responsible for pushing the eastern regions away, stating his view that the May 11 referendums in Donetsk and Luhansk were more a sign of protest against policies being undertaken in Kiev than a desire to separate. He noted that normal politics became impossible in the country after Yanukovich’s ouster due to “the formation of illegal armed militias that imposed their rule through violence and political terror.”

Symonenko dropped out of the presidential elections back in May along with several other candidates, saying the vote would be “illegitimate” due to the threats and censorship his party faced during the course of the campaign, problems which have only intensified since then.

In mid-September Ukraine’s Central Election Commission registered the KPU for the parliamentary elections, despite numerous attempts in recent months by the parliament, the Ministry of Justice and the Ukrainian Security Service to have it outlawed.

Attempts to Ban the Party

In May, acting Chairman of the Ukrainian Parliament Oleksandr Turchinov asked the Ministry of Justice to conduct security checks due to the KPU’s alleged support for protests that were occurring at that point in the southeast of the country. In mid-June, documents were presented to the Ministry of Justice by the Ukrainian Security Service accusing KPU members of fanning the flames of separatism, including criminal charges related to the financing and arming of “separatist terrorists”. On July 22 the Verkhovna Rada voted to eject the party’s delegates; Poroshenko signed an executive order confirming the party’s expulsion from the parliament.

Alexander Bozhko, a member of the Presidium of Ukraine’s antifascist committee, explained in an interview with the KPU that the desire to rid the country of communists is part of the desire “to find the guilty from the Soviet past,” noting that “these voters forget that for 24 years already the country has been governed” not by communists, but by a series of “saviors of the nations,” including “oligarchs and compradors.”

President Petro Poroshenko signed the Law on Lustration October 9, which includes measures to kick members of the Party of Regions and the Communist Party out of positions in the bureaucracy and civil service. Lustration was practiced in some states of Eastern Europe in the 1990s, ostensibly to rid the region of former communist bureaucrats; in the end many former communists simply joined other left-leaning parties.

The Bloc supporting Petro Poroshenko is set to win a plurality of 33.5 percent in the upcoming elections according to Ukraine’s “Rating” polling group, with 55 percent turnout expected. The Party of Regions proxy Opposition Block had an estimated 5.1 percent, according to the poll data.

Meanwhile, the self-proclaimed Donetsk and Luhansk People’s Republics (DPR and LPR) are set to hold their own leadership elections on November 2. DPR Vice Prime Minister Andrei Purgin told journalists on Saturday that he couldn’t imagine Donetsk participating in the Verkhovna Rada elections.

“Even if we elect our representatives, there are no guarantees they will not get killed in Kiev. It's enough to know what they do to opposition politicians there," Purgin said.