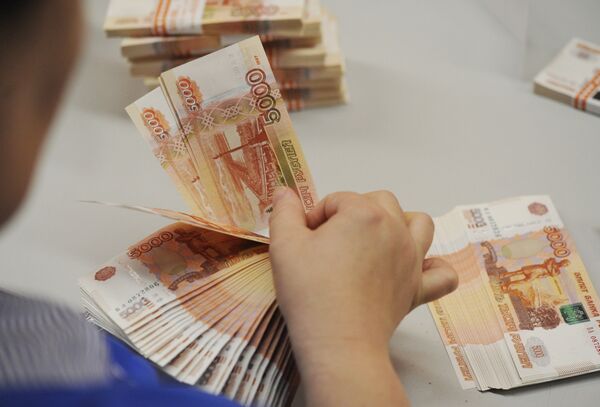 © RIA Novosti . Alexei Kudenko
/
Go to the photo bank
Subscribe
“Russia and the DPRK [Democratic People’s Republic of Korea] have begun carrying out transactions in rubles in the framework of agreements,” the statement posted on website of Russia’s Far East Development Ministry reads.

MOSCOW, October 20 (RIA Novosti) – The first transactions in rubles between Russia and North Korea were carried out in October, Russia’s Far East Development Ministry said in a statement Monday.

“Russia and the DPRK [Democratic People’s Republic of Korea] have begun carrying out transactions in rubles in the framework of agreements, reached during the 6th meeting of the intergovernmental committee on commercial-economic relations between the Russian Federation and the DPRK, headed by the Minister for the Development of the Russian Far East Alexander Galushka,” the statement posted on ministry’s website reads.

In May, Russian President Vladimir Putin signed a law ratifying an agreement on settlement of the DPRK's debt to Russia. Russia agreed to write off 90 percent of the North Korea’s debt to the former Soviet Union, which amounted to $10.94 billion as of September 17, 2012. The remaining 10 percent ($1.09 billion) is to be paid off in 40 installments over the next 20 years.