Lavrov: Western Sanctions' Goal is to Change Russia, Not to Settle Ukrainian Crisis 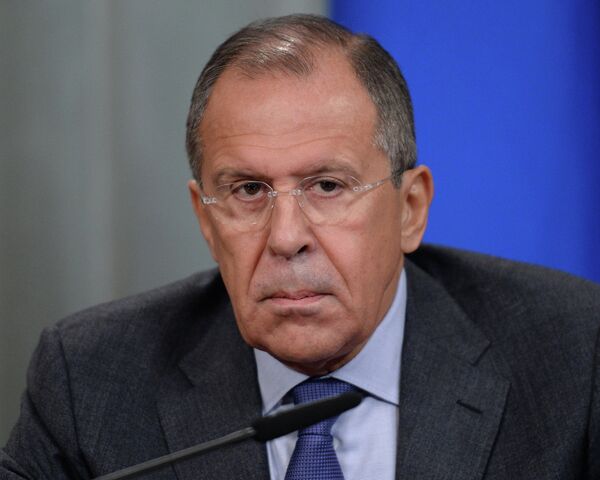 The goal of Western sanctions is to force to change the position of the Russian Federation on the key and fundamental issues, and not to resolve the crisis in Ukraine, Russian Foreign Minister Sergei Lavrov said.

MOSCOW, October 19 (RIA Novosti) - The goal of Western sanctions is to force to change the position of the Russian Federation on the key and fundamental issues, and not to resolve the crisis in Ukraine, Russian Foreign Minister Sergei Lavrov said.

"Our partners, who actually imposed the sanctions, do not hide the fact that the goal of these measures is not Ukraine. Essentially, in their statements and actions the true purpose of the restrictions are seen - to make over Russia, to change its position on the key issues of fundamental importance to us and to get [Russia] to take the position of the West," Lavrov said in a show on Russia’s NTV channel.

According to Lavrov, Western politicians are not talking about a change of regime in Russia, "although some of the outcasts in Europe say such phrases."

"By and large, they tell us to change our policies and approaches. It would be one thing if we were offered to look for something together. But we are told - we know how to act, and you must do it," he added.

According to the minister, such behavior is "the last century, the past era, colonial, inertial way of thinking."

"When in the modern world a multipolar world order is formed, it is impossible that one branch of the civilization (a civilization we share - a Christian one), someone alone, some group of countries dictated their will to others. There is an understanding that without the support of other centers of force in the modern world it is impossible to solve many other problems - to defeat terrorism, infectious diseases (now, for example, all are horrified by the Ebola virus). On that, whether there are politicians with a global strategic vision, will depend on how quickly this period will pass," Lavrov concluded.

Russia will not coordinate any terms of lifting the sanctions imposed by the United States and the European Union, Russian Foreign Minister Sergei Lavrov said.

"We are told - if you can help solve the crisis in Ukraine, we will cancel the sanctions; we will set a criteria: make one step, make sure that the militia allow observers to the border with Russia, etc. We answer very simple - no criteria and conditions of this kind [we] will not perform and coordinate," Lavrov said.

Lavrov stressed that Russia does more than anyone else for the crisis in Ukraine to be settled.

"We were at the origin of the April initiative in Geneva, subsequent Berlin initiatives. The Minsk agreements, as recorded in the protocol of September 5 this year, is the result of initiatives of Russian President Vladimir Putin and Ukraine's Petro Poroshenko. Now using all our contacts, we are making good faith on implementation of these agreements. But our Western colleagues do not really use their influence on Kiev authorities to convince them there is no alternative to moving towards the path, which was agreed between them and the militias," he added.

The minister noted that “no one wants to suffer damage, especially economic damage that our Western partners are trying to inflict.”

“We want to cooperate, but only reciprocally, to separate ideology from foreign policy and prevent any attempts of trading off economy for ambiguous and unilateral geopolitical goals,” Lavrov said.

“Perhaps, there is a ‘school of thought’ (I don’t belong to it) that wants Russia to make certain concessions, including unilateral ones, to secure economic gains and avoid loss (let’s be straight about the damage that comes from sanctions). I am not part of this ‘school’ not because I don’t love my country, or wish it well, or want its economy to grow and become more and more successful in solving social problems, but because apart from certain rights the foreign policy of countries like Russia should also be based on the duty to protect fairness, equality and democratic nature of international relations,” Lavrov added.

He said that Washington “goes out of its way to teach all countries how to set their record straight, establish the rule of law and respect democratic principles.” “But they lose enthusiasm as soon as these very principles – respecting international laws and democratic decision-making – are applied to international relations,” the Russian foreign minister emphasised.

Lavrov believes that “the recipe for success is to combine responsibility for making the world a fairer place with a non-confrontational but persistent promotion of our interests, and also readiness to make reasonable compromises based on the balance of interests, rather than on one-way concessions.”

Moscow does not attach much importance to anti-Russian remarks made by President Petro Poroshenko ahead of the forthcoming snap elections to the Ukrainian parliament, Russian Foreign Minister Sergei Lavrov said.

“As for [Poroshenko’s] public comments, Ukraine is amid an election campaign, tempers are flying high and some people resort to ‘cheap-shot’ attacks,” Lavrov said in an interview.

He said some political parties in the Ukrainian parliament, known as the Verkhovna Rada, tried to play the “nationalist” card to capitalize on the sentiment and rally grassroots voters.

“That’s why I prefer not to pay much attention to public remarks. Let’s wait for the elections and see who the Ukrainian parliament will be composed of, although I hope that the wisdom of the Ukrainian people will prevail,” the Russian foreign policy chief said.

He added Moscow regarded Poroshenko as a lawfully-elected Ukrainian president.

“He has gained full recognition in that capacity. He is in regular talks with Russian President Vladimir Putin, they have repeatedly met face-to-face on various occasions, and they keep in touch over the phone,” Lavrov said.

A snap parliamentary election to the Verkhovna Rada will be held in Ukraine on October 26. Luhansk and Donetsk self-proclaimed republics said they would hold a separate poll on November 2 in a bid to carve out greater autonomy. Kiev and the West have accused Russia of being behind this push in what they describe as an attempt to split up the country.

Moscow considers Minsk agreements on eastern Ukraine to be a kick-starter for a broader, nationwide dialogue in the conflict-ridden country, Russian Foreign Minister Sergei Lavrov said.

“The Minsk agreements, already underway [in Ukraine], are a sign that a nationwide dialogue has already begun,” Lavrov told Russia’s NTV channel.

The minister vowed that Moscow would continue “to back all efforts to implement the agreements, including those reached in Minsk,” as well as previous Geneva deals that Russia, the United States and the European Union struck back in April.

Kiev pledged to launch a nationwide, open and transparent dialogue on constitutional reforms during a three-way peace conference in the Swiss city of Geneva but the promise was never fulfilled, Lavrov stressed.

The minister praised the Friday breakfast meeting in Milan between Russian President Vladimir Putin and his Ukrainian counterpart, Petro Poroshenko, saying that "what is going on between our presidents right now proves that we will find the way out of the current standoff anyway."

“We cannot lose Ukraine, because it is not just a group of people who toppled the government and seized power…, but a close, fraternal nation that shares historical, cultural, existential and civilizational origins with us,” the foreign minister said.

The crisis in Ukraine could have been avoided, if at one time the treaty on European security proposed by Russia had been agreed, Russian Foreign Minister Sergei Lavrov said.

"In one of the foreign newspapers they called me "Mister No" - they used to call so the Soviet Foreign Minister Andrei Gromyko. I am flattered with the comparison with the great diplomat of the Soviet era. Supposedly we say "no" to all offers. Let's look at the facts. At one time, many years ago, we offered to negotiate and adopt a treaty on European security, which would codify proclaimed at the political level principle of indivisibility of security, when no state has the right to ensure its security at the expense of others. This treaty was rejected. It turns out to be that the NATO countries, which refused to even discuss [the treaty], are a collective "Mister No" Lavrov said in a show on Russia’s NTV channel.

"I am convinced that if the agreement on European security was at that time agreed and a single economic and humanitarian space from Lisbon to Vladivostok began to form, there would not have been the problems that we are having now which led to a profound crisis of statehood in Ukraine," he said.

The minister recalled that Russian President Vladimir Putin proposed to start a serious discussion with the European Union on the formation of a common economic and humanitarian space from the Atlantic to the Pacific. "A few years ago, we were said: let's wait - it meant "no." Now, after several years the leadership of the EU says that it is needed to think and begin to talk about it in practical terms," Lavrov added.

Russia, US Must Deliver On Existing Arms Reduction Treaty Before Agreeing New One

“Obviously, Americans want to revive talks on further strategic arms reductions (as John Kerry told me in Paris). But we’ve explained to our partners that we must first deliver on the 2010 Strategic Arms Reduction Treaty that was signed [in 2010],” Lavrov said.

The Strategic Arms Reduction Treaty (START) was first signed by the United States and the Soviet Union in 1991, leading to the largest arms control reduction in history. The deal expired in late 2009.

In April 2010, Russian then-President Dmitry Medvedev and US President Barack Obama signed the New START Treaty. It is to last for ten years and may be extended for an additional period of up to five years.

Relations between Moscow and Washington have been heavily affected by the fallout of the east Ukraine crisis, while some aspects of bilateral partnership have come to a standstill, Russian Foreign Minister Sergei Lavrov said.

“Our relations are complicated, they are not just ‘frozen,’ some of the spheres are on a standstill that had been there long before the Ukrainian crisis broke out,” he confessed.

“Our relations are complicated both by the current divide on some issues, which we are debating and trying to resolve, but also by the existing atmosphere, obviously,” the minister said in an interview with Russia’s NTV channel.

Lavrov added that his Tuesday meeting with US Secretary of State John Kerry in Paris indicated Washington’s determination to look for common ground and work out some major differences.

At the same time, the Russian minister stressed the United States is still reluctant to consider the interests of all the parties involved.

“The majority of proposals that our American partners have tabled so far are designed to serve their own interests, while our initiatives, as a rule, seek to accommodate their approach and strike a balance of interests,” Lavrov underscored.

According to Lavrov, Russia and the United States are working together on the crises in North Africa and the Middle East, as well as on the Iranian nuclear deal, Korea’s denuclearization, and the entire UN Security Council agenda.

He admitted that the east Ukrainian conflict has been a recurring theme at all discussions. “In fact, the foreign policy agenda alone is filled with so many controversies that we are constantly in search of compromises,” Lavrov added.