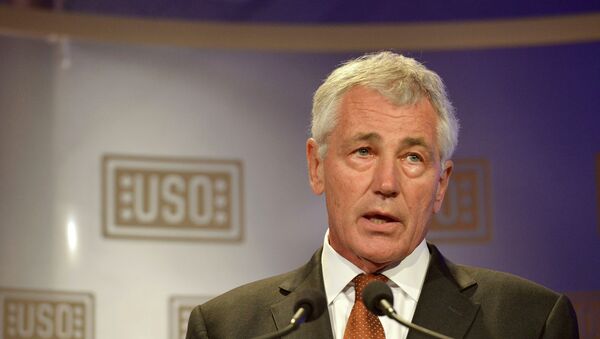 Pentagon officials have praised US Army for their service and have made statements about unexpected threats of Ebola and ISIS during 2014 USO Gala.

MOSCOW, October 18 (RIA Novosti) - Pentagon leaders have saluted the United Service Organization Inc. (USO) and the US troops for their service and commitment at the 2014 USO Gala held in Washington Saturday.

"I want to thank the enlisted men and women who are being honored tonight," the US Department of Defense quoted US Defense Secretary Chuck Hagel as saying.

"You're going to have some work to do, and we're proud to be partners with you in doing it," he added.

The US Army is currently leading the coalition against the Islamic State terrorist group in Iraq and Syria.

The Islamic State, also known as the Islamic State (IS) of Iraq and Greater Syria (ISIS) or the Islamic State of Iraq and the Levant (ISIL), is a Sunni group that has been fighting the Syrian government since 2012. In June 2014, it launched an offensive in Iraq, seizing vast areas in both countries and announcing the establishment of an Islamic caliphate on the territories under its control.