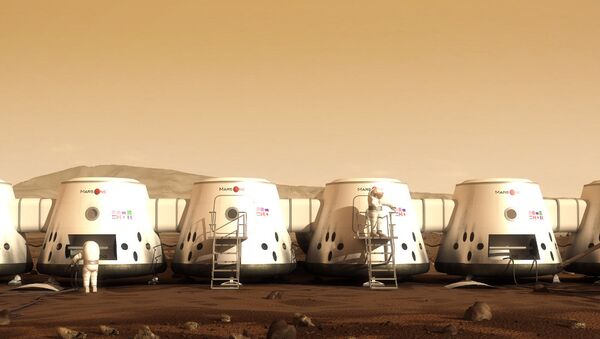 The ambitious Dutch space exploration project Mars One is likely to fail unless several technological fixes can be found, Syndey Do, a PhD student from MIT, said in an interview with Radio VR.

MOSCOW, October 18 (RIA Novosti) - Sydney Do, a Graduate Research Assistant and Doctoral Candidate in Aeronautics and Astronautics at the Massachusetts Institute of Technology discussed the reasons why the Mars One project is bound to fail with Radio VR. These include imbalances in the composition of breathable air, a lack of technology and equipment, as well as natural conditions that are inhospitable to humans.

“We’re not saying that Mars One is not possible; we’re saying that the current state of technology means that the Mars One base layout is infeasible”, Do told VR via phone from Boston. His MIT research team has recently published a report that says the amateur astronauts would last no more than 68 days on the surface of the Red Planet, hinting that the Mars One initiative won’t be successful. “In fact, at MIT we’re all excited about the human-inhabited space lab”, he continues, “and we want to help increase our collective knowledge in the area so that we could finally do it in a sustainable and affordable manner”.

The MIT report was released in the spirit of partnership, and the US scientists are interested in taking the Dutch initiative further, not in repudiating it, as early press reports would suggest. “We contacted the Mars One team twice”, Do says. “[The] first time, before they even started their work, we asked them to provide data so that we could calculate the results as accurately as possible. And we never heard back from them. We also reached out to them when the report was ready in order to point out some areas of concern, give recommendations and get their plan improved. We also asked for some data for our model, because the amount of publicly available information is limited, and in our model we had to use data from the NASA handbook and the International Space Station”.

Do describes the model his team used to evaluate the chances of the Mars settlement succeeding as similar to a computer game with a real-life dataset. “We’ve set up a simulation model similar to the Sim City game, so essentially we run a simulation of a day in the life of an astronaut on the surface of Mars. Before we start the simulation, we need to select technologies and put them into a simulated habitat, as well as the activities of the crew”, the expert explained. As the design of the model suggests, the results are largely dependent on the parameters and data, and here’s where the main issue is.

“We don’t have the exact data that they have because it’s not publicly shared”, Do admits. However, this does not mead the MIT team is wrong in their judgment of Mars Ones’ prospects, as the expert carries on to say that “Mars One earlier claimed their dataset would be very similar to that of the International Space Station, which we have used in our model”. Do goes on to conclude that “in all we are absolutely sure that although the exact values of our simulation and our study may not be correct, the overall observations and results still hold true”.

There are several reasons why the Mars One expedition is most likely to fail at this point in the history of humanity, the physicist explains.

“We first ran the simulation and did find that the problem with the excessive oxygen that would occur on day 66 and would ultimately lead to crew suffocation on day 68. But following that observation, we’ve added some more technologies and changed some of the layout of the habitat to improve the lives of the crew and so we keep on going through this process and this is how we give recommendations. You turn knobs and you’re saying what the outcome is”, Do says. The key problem here is that the humanity has not yet practiced sending life-support technology into space, the expert suggests.

“In this study we’ve found that if Mars One is using currently-available technology, the problems will occur on the 68th day, but if you incorporate technology that has not yet flown in space, you can make the crew survive.  But if you do this, the mission becomes more expensive.  Besides, Mars One had said they don’t need any new technology”.

The use of advanced technology is crucial if Mars colonization is to succeed, Do insists.  “A lot of new technology like 3D-printing would be necessary to be made available to use in space in order to produce all types of spare equipment, which would include filters, pumps, and circuit boards”.
Apart from the tech aspect, a shift in concept approach to space colonization may be necessary to achieve success, Do says. Instead of delivering equipment and resources from their home planet, humans could produce them on Mars. “There’s a field of study called ‘Closed Ecological Life-Support Systems’ which looks at building large terrariums people could live within. They are materially closed, and only energy comes in from the outside, mostly sunlight, and a lot of research has been done in Russia, at the Institute of Biomedical Problems in the 70s and 80s. Maybe on Mars in term of sustaining people you would want to do that”, the expert suggests, adding that “we’re starting the transition from mechanical means to biological means of providing the resources necessary to support human life in space”.

However, the Martian environment could negatively impact the human physical condition in the long-term. “We still don’t know how the Martian environment would affect people; we’ve never put people there. But there are several issues. First is gravity, which is one third of that on Earth, and over long periods of time because you don’t have the same weight loading on your body, you bones start to atrophy and [grow] thin, and your muscles start to atrophy. Lower gravity pressure on [your] heart means that it starts getting weaker over time. In addition to that, Mars itself is a harsh environment, temperatures outside typically average around -60C, the atmosphere is not breathable and is itself 1% of the thickness of the Earth’s atmosphere. So you can’t just walk outside whenever you want to”, Do says, adding that there is another huge issue that might possibly prevent the establishment of permanent human settlements on Mars. “We also don’t know how to give birth to someone in that environment and how to raise them in that environment”, the expert says.

Despite all the concerns, scientists are slowly but surely advancing in finding ways to colonize other planets, including Mars. “We have some understanding regarding the resources available on Mars, and NASA is sending a rover to Mars; it is very similar to Curiosity rover, in 2020 it is going to test out a system that processes the carbon dioxide in the atmosphere to recover oxygen for later use. We know that in some parts of Mars, especially in the polar regions, there is water ice, which is underneath the thin layer of soil, and we can process that. There also [are] a lot of metals in the Martian soil, which can be processed to produce spare parts. So, we know a lot about the environment, but the big unknown is how that environment will ultimately affect the human body”, the expert concludes.

The Mars One project is a private incentive that intends to establish a human colony on the Red Planet by 2025. The colonization concept includes a one-way flight for a select group of humans to Mars and further documentation of their Martian life in a reality TV show.