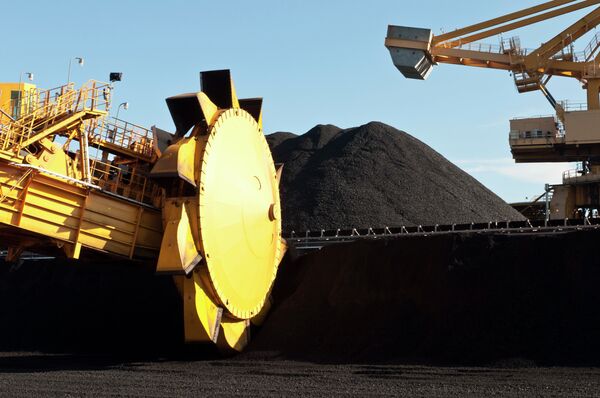 © Flickr / Image Library
Subscribe
The world's largest Newcastle Coal Port located in Australia blockaded by 30 environmentalists in protest of its contribution to the destruction of the Pacific Islands.

"The Pacific Climate Warriors have been welcomed back to shore after a long day blockading the Newcastle Coal Port," the environmentalists wrote on its live blog covering the protest.

"Only four of the twelve ships, including two coal ships, scheduled to pass through the port have broken the blockade lead by a group of Pacific Climate Warriors representing 12 Pacific Island nations," the group added.

The protesters paddled out into the harbor of the Newcastle Port via hand-built traditional canoes to stop coal exports for a day and send their message to the fossil fuel industry, "We are not drowning. We are fighting."

The Warriors claim coal exported from the port contributes to climate change while having a direct impact on the islanders' livelihood and the environment. According to the group's live blog, coal companies can expect more protests from the Pacific Climate Warriors in the future.

The group was joined by hundreds of volunteers from around Australia to "stand in solidarity with the Pacific Warriors" in protest. They reached out online using the hashtag #StandUpForThePacific to raise awareness of the effects of the coal port on the Pacific Islands.

The activists traveled from nations including the Marshall Islands, Fiji, Vanuatu, Tokelau, the Solomon Islands and Papua New Guinea. Although an annual flotilla blockade has been held for several years on the port, this was the first time protesters were joined by the Pacific Islanders.