US Not Planning to Build Permanent Bases, Increase Forces Structure in Europe: US General 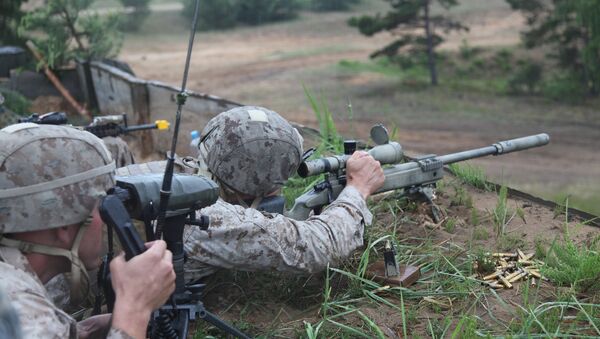 © US Army / Spc. Edward Bates
Subscribe
The United States does not intend to build permanent bases in Europe or to increase permanent US force structure there, but will stick to the concept of rotational forces, stated Maj. Gen. Walter Piatt, deputy commanding general of US Army Europe.

WASHINGTON, October 17 (RIA Novosti) - The United States does not intend to build permanent bases in Europe or to increase permanent US force structure there, but will stick to the concept of rotational forces, stated Maj. Gen. Walter Piatt, deputy commanding general of US Army Europe.

"I don't envision we are going to increase permanent US forces structure. We don't need it. We've got the bases about right," Piatt said during the discussion at the Center for Strategic and International Studies in Washington, D.C, stressing that he considers this a result of everybody's commitment to end the Cold War. "This is a result of our success," Piatt added.

The general also emphasized that the United States will not build permanent bases in Europe.

"That is not part of our plan, nor part of our vision, nor do we see it as a requirement for the future," he said, explaining that the United States has access to what it needs as well as everything necessary to facilitate the rotational forces.

The general underlined that if more forces are needed, they will be sent, but not permanently. He noted, however, that sending new forces raises the question of sequestration.

"As the chief said, if we need a large force to respond to a large crisis somewhere his fear is that we won't be ready, and he is going to be forced to send forces that aren't ready into a conflict," Piatt explained.

"There is a much more than adequate force now," Piatt said. "The rotational forces we are using, the regionally alighted forces and that concept will provide the right amount of force to guarantee the readiness levels will be needed in case of a crisis and if conventional forces are required," he added.

Relations between Russia and NATO have been strained since the alliance accused Russia of meddling in the Ukrainian conflict, a claim Russia has repeatedly denied.

Following Crimea's reunification with Russia in March, NATO stepped up its military presence near Russia's borders, specifically in Poland and the former Soviet Baltic states of Latvia, Lithuania and Estonia. Russia has repeatedly expressed concern over NATO's increased military presence in its neighboring states.