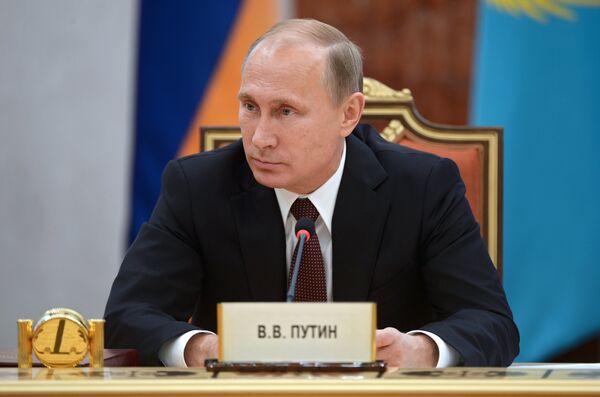 © RIA Novosti . Alexei Nikolsky
/
Go to the mediabank
Subscribe
International
India
Africa
It will be difficult for Western companies to come back to Russian markets as their refusal to cooperate with Russia under sanctions would seriously damage their reputation, Russian President Vladimir Putin said.

MOSCOW, October 15 (RIA Novosti) - It will be difficult for Western companies to come back to Russian markets as their refusal to cooperate with Russia under sanctions would seriously damage their reputation, Russian President Vladimir Putin said.

"It is obvious that the decline in mutual confidence is bound to have a negative impact on both the international business climate in general and on the operation of European and American companies in Russia, bearing in mind that such companies will find it difficult to recover from reputational damage," Putin said in an interview with Serbian newspaper Politika ahead of his visit to Belgrade, scheduled for October 16.

The president also said US sanctions against Russia's financial sector would blemish the reputation of the US banking system as a reliable investment partner.

"In addition, it will make other countries think carefully whether it is wise to invest their funds in the American banking system and increase their dependence on economic cooperation with the United States," Putin noted.

The European Union, the United States and their allies have imposed several rounds of sanctions against Russia over its alleged involvement in the Ukrainian crisis, a claim Moscow has repeatedly denied.

Amid the restrictions, the Russian government has been working on developing an import substitution program to help companies affected by the sanctions to find alternatives to Western imports.

Russia has also been strengthening cooperation with Asia-Pacific countries, particularly China. On Monday, Moscow and Beijing signed a number of intergovernmental agreements on gas deliveries, satellite systems and bank financing.