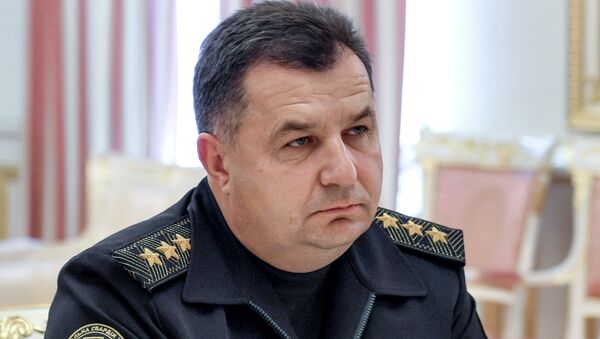 The National Guard’s effective operation in Kharkiv, which kept the region from turning into a self-proclaimed republic, was one of the reasons why its commander was appointed Ukraine’s new defense minister, President Petro Poroshenko said Wednesday.

KIEV, October 15 (RIA Novosti) – The National Guard's operations in Kharkiv, which kept the region from turning into a self-proclaimed republic, was one of the reasons why its commander was appointed Ukraine's new defense minister, President Petro Poroshenko said Wednesday.

"During yesterday's meeting I voiced several reasons [for his appointment], including an effective storming of the Kharkiv region administration by the National Guard's Jaguar unit, which prevented another Ukrainian region from turning into the so-called KPR [Kharkiv People's Republic]," Poroshenko said.

Gen. Poltorak, 49, has served as the National Guard's commander since March 19, 2014. He has also served for less than a month as the Ukrainian Ministry of Internal Affairs" commander of internal troops.

From 2002, he worked as the head of the Ukrainian Ministry of Internal Affairs' Academy of Interior Troops.

Poltorak replaced Valeriy Heletei who resigned last week. Heletei came under heavy criticism over Kiev's military failures in the east of the country, including the disastrous battle for Ilovaisk [a town in the Donetsk region], in which at least 200 servicemen died when encircled by independence forces.

Ukrainian military forces have been fighting independence supporters in the country's southeastern regions since mid-April, when Kiev launched a military operation in the region in response to local residents' refusal to recognize the new government, which came to power as a result of a coup in February.