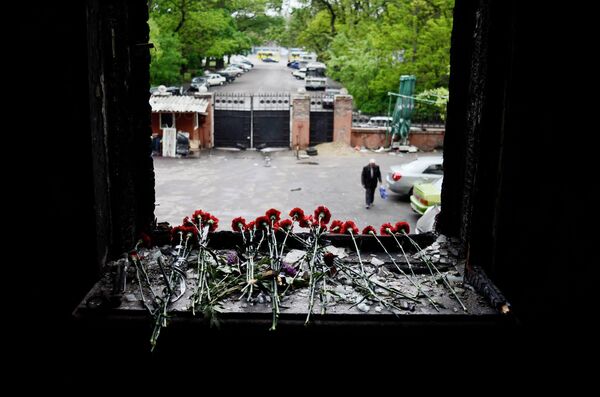 © RIA Novosti . Anton Kruglov
/
Go to the photo bank
Subscribe
Russia needs to be more vocal in its support of the anti-fascist movement in Ukraine by banning trade with Kiev's businessmen, Anton Davidchenko, leader of the National Alternative movement from Odesa said Wednesday.

MOSCOW, October 15 (RIA Novosti) - Russia needs to be more vocal in its support of the anti-fascist movement in Ukraine by banning trade with Kiev's businessmen, Anton Davidchenko, leader of the National Alternative movement from Odesa said Wednesday.

"We want to get guarantees on behalf of the Russian Federation that if something was to happen, a very harsh reaction would follow… We see the situation getting worse after May 2, which means the [Russian] reaction was not harsh enough," he told journalists referring to the mass clashes between protesters in Odesa that led to more than 200 people being burnt alive in the Trade Unions House building.

On Tuesday, hundreds of people took to the streets in Kharkiv and Kiev in support of the Ukrainian Insurgent Army and in commemoration of the servicemen who died in the fight against the militia in the southeast of the country over the past several months. Davidchenko called the rallies "marches of fascism that remind us of the events in Germany in the 1930s."

"This [radical movement] has been happening in Kiev for the past five years, but has now spread to Kharkiv and Odesa, and that is unacceptable. The local people have absolutely no influence and cannot resist the armed groups that travel the country and do whatever they please," he said, calling for more decisive Russian action.

"Odesa is questioning, why take to the streets if nothing will follow, why should the people come out and be shot. Why should people die if no one cares? And no one in the West seems to care. And that is why we are addressing Russia saying we need to openly state at all levels that international law is not working," he said.

The United States and the European Union have imposed several rounds of sanctions against Russian industries and individuals since Crimea separated from Ukraine and became part of the Russian Federation. Some Western authorities continue to blame Moscow for interfering with the Ukrainian internal affairs.

"We see how Western countries interfere in the affairs of anyone. We see that the international rule of law is not observed… Russia is not silent, hence the sanctions. But they are not concrete," Davidchenko said.

"We ask for [Russian] support, we want to live as one big family… as it was in the Soviet Union, in the Russian Empire, to help each other. And we see that the only help we can expect now is from Russia," he said.

The fighting between the national forces and the independence supporters in Ukraine's southeast has claimed thousands of lives since Kiev launched a special operation in the region in mid-April. Petro Poroshenko, elected as Ukraine's president in May, attempted to install ceasefire in the region several times and bring the sides to the negotiation table.

In his next step, he announced snap parliamentary elections to be held on October 26, but Davidchenko cannot see any promising candidates.

"There is no one to vote for on October 26. The communist party is disappointing, they turned into a political project for business interests. They are ready to support any party and power that is ruling in Ukraine right now," he said.

"We need a new type of power, a power that will not be controlled by Ukrainian oligarchs, because they see no benefit in a union with Russia. They trade with Russia but keep their money in the West, thus the West manipulates their views. And that is why I think Russia should stop trade with Ukrainian oligarchs, because they are two-faced," Davidchenko said.

The National Alternative movement and other movements in Russian-speaking parts of Ukraine remain in talks with Moscow's lawmakers and top authorities, asking for their support. Outside of Russia, they have also addressed the European Court of Human Rights and the United Nations to investigate the deadly May clashes in Odesa and not let other human rights violations go unnoticed, Davidchenko said.