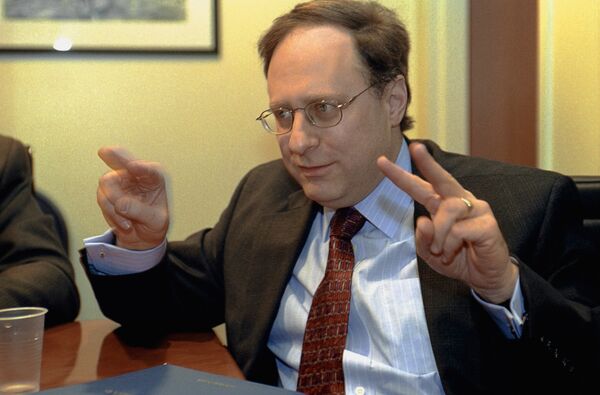 © RIA Novosti . Yuryi Abramochkin
/
Go to the photo bank
Subscribe
Deputy Secretary General of NATO Alexander Vershbow compared the actions of the Islamic State (IS) militant group with Russia’s politics while speaking at the Security Jam conference on Wednesday.

BRUSSELS, October 15 (RIA Novosti) - Deputy Secretary General of NATO Alexander Vershbow compared the actions of the Islamic State (IS) militant group with Russia’s politics while speaking at the Security Jam conference on Wednesday.

“Mr. Putin’s neo-Soviet revisionism and ISIL’s [IS’s] terrorism have their own distinctive characteristics. But they share similar means – intimidation and violence to achieve a similar goal: rejecting democracy, tolerance, and the rule of law as the gold standard for international relations. Together, they are part of what I call ‘the rise of the rejectionists’ – a trend that may dominate NATO’s security environment for many years to come,” Vershbow stated.

This is not the first doubtful statement regarding Russia made by a Western leader in recent months.

In September, during his speech at the UN General Assembly, US President Barack Obama placed Russia second on a list of key global threats, with the first place given to the spread of Ebola, with the threat from the IS, known for killing hundreds of people and illegally occupying vast territories in the Middle East only occupying third place.

After Obama’s address, Russian Foreign Minister Sergei Lavrov said that the “speech of a peacekeeper” did not sound convincing as it was worded.

Lavrov also stated that Russia, on the contrary, is interested in de-escalating conflicts across the world through a fair dialogue based on equality and mutual respect.

Relations between Russia and NATO have deteriorated amid the crisis in Ukraine. The alliance has repeatedly accused Russia of meddling in Ukraine's internal affairs, sending troops to Ukraine, and went as far as to claim that Moscow planned to invade Ukraine. However, none of these statements were supported with any evidence.