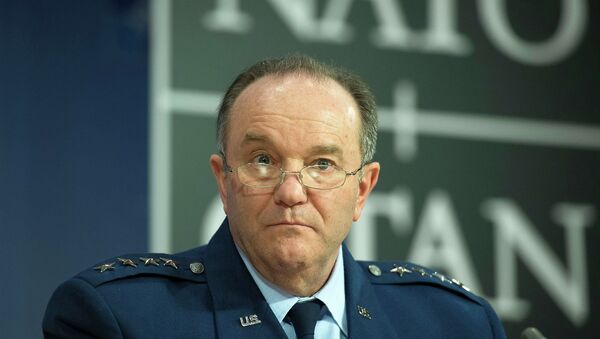 © NATO
Subscribe
NATO’s top military commander said the alliance would welcome the withdrawal of Russian troops from the border with Ukraine, however claimed there had been no “major movement” yet, The Associated Press reported Wednesday.

MOSCOW, October 15 (RIA Novosti) - NATO’s top military commander said the alliance would welcome the withdrawal of Russian troops from the border with Ukraine, however claimed there had been no “major movement” yet, The Associated Press reported Wednesday.

"We would welcome withdrawal of troops on that border, and we are anxiously watching what is happening," US Air Force Gen. Philip Breedlove, the Supreme Allied Commander Europe, told The Associated Press during the NATO conference in Thessaloniki, Greece.

"We have not seen major movements yet. Now we will watch to see if there is delivery on the promise," the NATO military commander added.

On October 12, Russian President Vladimir Putin ordered Defense Minister Sergei Shoigu to begin the withdrawal of some 17,600 troops who took part in military drills in the southern Rostov Region. Hours later, the Defense Ministry reported that the redeployment of the troops had already begun, as ordered.

According to Russian Prime Minister Dmitry Medvedev, the Russian troops in the Rostov region have been in the area since this summer to participate in massive drills and have no ties to the situation in Ukraine, though the West has consistently accused Russia of being militarily involved in the conflict.