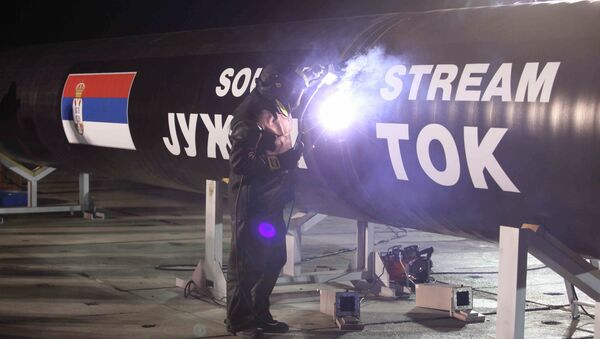 © Gazprom
Subscribe
The position of the new team of European Commissioners on the construction of the Serbian section of the Russia-led South Stream gas pipeline is not clear yet though preparations for the project are underway, the Russian president's top aide, Yury Ushakov, told journalists Wednesday.

MOSCOW, October 15 (RIA Novosti) - The position of the new team of European Commissioners on the construction of the Serbian section of the Russia-led South Stream gas pipeline is not clear yet though preparations for the project are underway, the Russian president's top aide, Yury Ushakov, told journalists Wednesday.

"Preparations for the construction of the Serbian section are well underway. I expect them [European Commissioners] to mention it. It has been made clear to Serbia that it will find next to impossible to implement this project without a go-ahead from Brussels, although [Serbia] is more than ready. It is of great interest to them," the presidential aide said.

Ushakov said that the recent elections to the European Commission effectively put its decision-making on hold, meaning that it would take more time for the union's executive body to agree on a unified approach to the South Stream project. A new team of 28 commissioners, one from each member state, is appointed every five years.

"The Commission is getting new members, so we are still to learn about Brussels" stance [on the pipeline]. We are continuing to raise awareness of the project. It's not over yet. We are ready to go ahead," Ushakov said.

In early October, Serbian Deputy Prime Minister and Foreign Minister Ivica Dacic reaffirmed Belgrade's commitment to the South Stream project, saying it would go ahead with its construction.

Russian energy giant Gazprom started building the South Stream gas pipeline across the Black Sea in 2012 to reduce the unreliable passage of Russian natural gas to central and southern Europe through Ukraine. The pipeline is expected to be fully operational by 2018.

Brussels has long been trying to hamper the project saying it violates the European Union's Third Energy Package, which stipulates that pipelines in its member countries cannot belong to natural gas producers. Moscow insists that the construction of the pipeline does not contradict the regulations in any way.

The pipeline's route is expected to come ashore in Bulgaria and continue to Serbia, where it divides, with the first branch going through Hungary to Austria and the second through Hungary and Slovenia to Italy. Under the plan, pipeline sections are also to be constructed in Croatia and the Bosnian Serb Republic.

Intergovernmental agreements were earlier signed with Serbia, Bulgaria, Hungary, Greece, Slovenia, Austria and Croatia for the construction of the pipeline's onshore sections. However, in August, Bulgaria suspended operations, saying that they did not meet EU requirements.