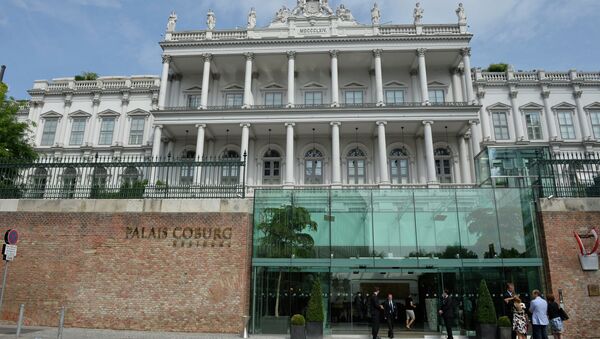 © Flickr / European External Action Service
Subscribe
As the European Union, the United States and Iran are preparing to hold nuclear talks in the Austrian capital, activists from Stop the Bomb coalition for a nuclear-free and democratic Iran are staging a protest in front of the Palais Coburg, where the talks are about to begin, and demand the dismantlement of Tehran's nuclear infrastructure.

VIENNA, October 15 (RIA Novosti), Daria Chernyshova - As the European Union, the United States and Iran are preparing to hold nuclear talks in the Austrian capital, activists from Stop the Bomb coalition for a nuclear-free and democratic Iran are staging a protest in front of the Palais Coburg, where the talks are about to begin, and demand the dismantlement of Tehran's nuclear infrastructure.

"We are protesting against the situation we are witnessing now in the nuclear talks. The P5+1 is backing away from their own demands laid down at the United Nations Security Council resolutions," Stefan Schaden, spokesperson for Stop the Bomb told RIA Novosti Wednesday.

"They are obviously ready to offer a deal to the Iranian regime, which would leave the nuclear infrastructure intact, that would mean to institutionalize the nuclear threat," Schaden said.

"Iranian regime has to dismantle the nuclear infrastructure and to stop its illegal nuclear program," Schaden said, adding that unlike other nuclear nations, Iran violates the Treaty on the Non-Proliferation of Nuclear Weapons (NPT).

"We have staged such protests before and that is not the number of people, but of centrifuges that matters," Schaden told RIA Novisti.

Talks on Iran's nuclear program underway in Vienna are aimed to bridge the remaining differences before the November 24 deadline, by which Iran and the six world powers - Russia, the United States, France, Britain, China and Germany - are due to strike a comprehensive nuclear deal.

On Tuesday evening, Zarif talked to Ashton for around three hours - the meeting deemed as "useful" by the European Union.

The latest round of negotiations took place on September 24, when the group of international mediators met with the Iranian delegation in New York to discuss the Islamic Republic nuclear program, although they failed to reach an agreement with Tehran on any of the key issues.