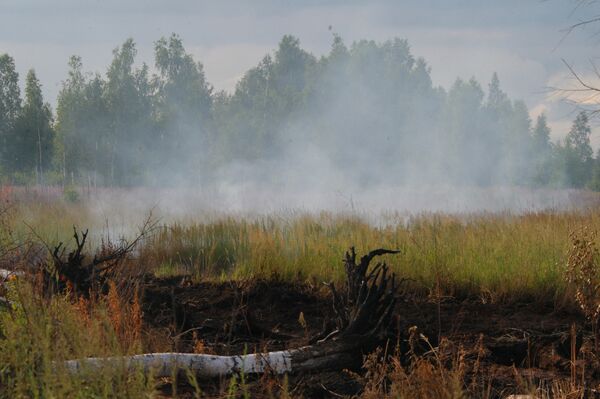 The smoke from the peat fire has presumably reached the outskirts of Moscow. The Ministry of Emergency Situations is deploying troops to the area and plans to put the fire out within two days, Gazeta reports.

100 firefighters and 14 fire-fighting vehicles have been sent to the region from Tula. Firefighters from the Kursk, Kaluga, Orel and Smolensk regions are on standby, while 120 firefighters from Bryansk region and a Mi-8 helicopter with a downstream device are already working on site, the source said.

Last Friday, some residents of Moscow reported a strong smell of smoke, similar to that of burning peat coming from the direction of Bryansk Region. Although satellite images revealed smoke emanating from the woods of Bryansk, the acting Deputy Head of Bryansk Region’s Ministry of Emergency Situations department Aleksandr Melkov said there were no wildfires in the region, Gazeta said.

However, the next day, the Deputy Head from the Central Ministry of Emergency Situations department arrived and after scouting the area by helicopter, immediately discovered 14 fires in the area.

Activists of Greenpeace Russia claim the peat fire in Bryansk Region is 54 times bigger than it has been reported in media. According to Greenpeace the peat fire covers an area of 1085 hectares, Gazeta said.

During the summer of 2010, Moscow was covered in heavy layers of smoke coming from peat bog fires in nearby regions for over two weeks. The carbon monoxide concentration in the air exceeded the maximum permissible level by six to seven times during the summer of 2010, said RIA Novosti. Some residents of the Russian capital fear possible recurrence of those events as a result of the peat fire in the Bryansk region.