Kerry: Int'l Community Will Not Recognize Any Independence Vote in East Ukraine 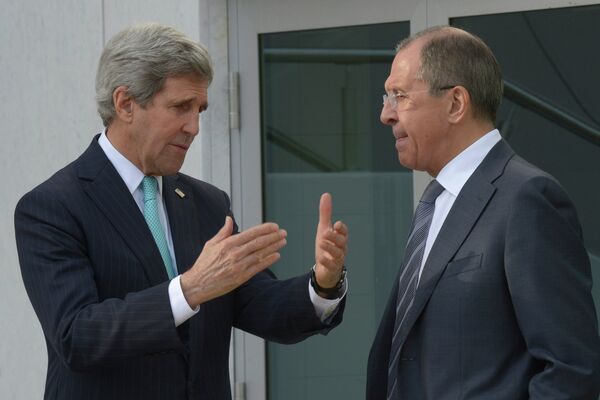 © RIA Novosti . Eduard Pesov
/
Go to the photo bank
Subscribe
US Secretary of State John Kerry said Tuesday that Kiev and the international community would deem any independence referendums in eastern Ukraine as illegitimate and would never recognize them.

PARIS, October 14 (RIA Novosti) - US Secretary of State John Kerry said Tuesday that Kiev and the international community would deem any independence referendums in eastern Ukraine as illegitimate and would never recognize them.

"I emphasized to [Russia’s] Foreign Minister Lavrov that the only legitimate elections in Ukraine are the Rada elections on October 26 and the December 7 elections of local leaders in the Donbas special status zone," Kerry told reporters following three-hour talks with Lavrov in Paris.

"In our judgment, any efforts to hold independence referendums in Luhansk and Donetsk at this time would be a violation of the Minsk agreements and their results will not be recognized by Ukraine and the international community," Kerry said.

In April, Ukraine's southeastern regions became the target of a Kiev-led military operation, launched in response to the local residents' refusal to recognize the new Ukrainian government which came to power as a result of a February coup. Residents of the Luhansk and Donetsk regions proclaimed the establishment Luhansk and Donetsk People’s republics, based on the results of referendums held in May.

On September 5, Kiev and the Donbas independence supporters agreed to a ceasefire as a result of a Contact Group meeting in Minsk. A nine-point memorandum that specifies the steps for the ceasefire implementation was adopted later that month.

The status of Ukraine's southeastern regions remains a matter of debate between Kiev authorities and independence supporters. On September 16, the Ukrainian parliament agreed to adopt a law granting special status to the Donetsk and Luhansk regions and ensuring early elections of the heads of the self-proclaimed republics.