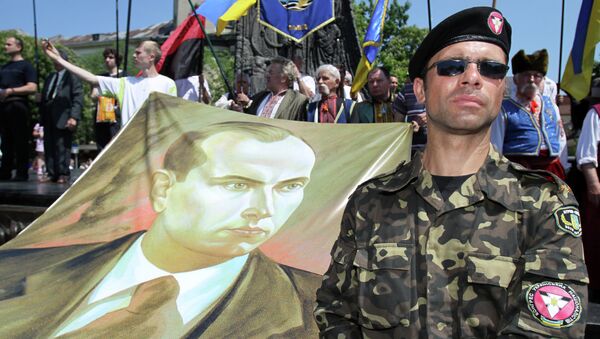 © RIA Novosti . Petr Zadorozhny
/
Go to the photo bank
Subscribe
From the western Ukrainian city of Lviv to the front lines of the civil war, far-right neo-fascist groups have made their presence felt on and off the battlefield; these groups started to influence the country's national consciousness following the country's "Orange Revolution", and gained an unprecedented level of political and military amid the Euromaidan coup of February 2014.

MOSCOW, October 13 (RIA Novosti), Ekaterina Blinova - From the western Ukrainian city of Lviv to the front lines of the civil war, far-right neo-fascist groups have made their presence felt on and off the battlefield; these groups started to influence the country's national consciousness following the country's "Orange Revolution", and gained an unprecedented level of political and military amid the Euromaidan coup of February 2014.

As radicals, who sided with the Nazis against Poland and organized the active purging of the Polish community in the part of Poland, which was to become western Ukraine, Stepan Bandera and Yaroslav Stetsko seem like unlikely heroes in the 21st century. However, this is how they are perceived in the western Ukrainian city of Lviv, which started the 20th century as a vibrant, Austro-Hungarian melting pot of Polish, Jewish, Ukrainian and Armenian culture and ended it as a solidly Ukrainian hotbed of ultra-nationalist and anti-Russian sentiment. One of the city’s most influential residents is Oleh Tyahnibok, leader of the right-wing Svoboda Party.

In his 2013 article, "The Return of the Ukrainian Far Right. The Case of VO Svoboda," Per Anders Rudling, an Associate Professor of the Department of History at Lund University (Sweden), wrote: "Political rituals, processions, re-enactments and sacralization of memory are characteristic features of the intellectual life in contemporary Lviv… The 70th anniversary of the German invasion and [OUN leader] Stetsko's 'renewal of Ukrainian statehood' was re-enacted in Lviv as a popular festival, where parents with small children waved flags to re-enactors in SS uniforms… Ultra-nationalist ideologues have found both effective and lucrative ways to work with entrepreneurs to popularize and disseminate their narrative to the youth."

Rudling emphasizes that Tyahnibok's Svoboda party as well as the National Socialist parties which banded together to become the Right Sector claim to be the "heirs" of Bandera’s Organization of Ukrainian Nationalists-Ukrainian Insurgent Army (OUN-UPA). Along with the Ukrainian trident and the colors red and black, the organization uses "a mirror image of the so-called Wolfsangel, or Wolf’s hook, which was used by several SS divisions and, after the war, by neo-Nazi organizations," the professor points out. Rudling explains that the roots of OUN-UPA lie in "indigenous Ukrainian fascism" which was "based upon Friedrich Nietzsche, Georges Sorel and Charles Maurras" as well as the translated works of Hitler and Mussolini.

Ukrainian nationalist organizations, such as the Svoboda party, have always put an emphasis on cultivating the younger generation, recruiting new members and involving them in nationalist activities. Former Ukrainian President Viktor Yushchenko, who Ukrainians voted out after he’d served his single term in 2005-2010, facilitated such efforts by altering the Ukrainian school curriculum. Under his presidency’s educational reforms, OUN-UPA was glorified; he declared Stepan Bandera, its leader, a national hero of Ukraine. Rudling underscores that the state went about actively "emphasizing the OUN-UPA's 'patriotism, national solidarity, self-sacrifice, and idealistic commitment to common goals and values'," while turning a blind eye to its involvement in the holocaust and collaboration with Nazi Germany.

First alphabet for young Bandera (Nazi) supporters. #Ukraine The level of 'poetry' speaks for itself. pic.twitter.com/ZYl3OKN2zX

Between 2006 and 2010, Valentyn Nalyvaichenko, the director of the Ukrainian Security Service (SBU), played an important role in disseminating "the historical truth of the past of the Ukrainian people," presenting the mythological conceptions of OUN-UPA’s "self-sacrificial heroism" and a large-scale Soviet genocide of Ukrainians, the professor notes. Following the events of February 2014, Valentin Nalyvaichenko reassumed the post of SBU chief.

In his article, written in 2012-2013, Rudling notes that Svoboda party facilitated the emergence of its radical wing, headed by Yurii Mykhalchyshyn – Tyahnibok's adviser on ideological matters. According to the professor, Mykhalchyshyn served as a link between Svoboda and the so-called autonomous nationalists. The key component of the Ukrainian ultra-nationalism subculture was street violence and the cult of force. According to Rudling, in 2011, three years before the Euromaidan coup, Mykhalchyshyn said: "Our Banderite army will cross the Dnipro and throw that blue-ass gang [Party of Regions], which today usurps the power, out of Ukraine. That will make those Asiatic dogs shut their ugly mouths." In three short years, Mykhalchyshyn would get his chance.

During the Euromaidan coup of February 2014, young Ukrainians were used as the main fighting force of the Ukrainian nationalist movement, and this continues to be the case. The Right Sector, a radical paramilitary organization headed by Dmitro Yarosh, unified the ultra-nationalist groups. When Donetsk and Lugansk voted to secede from an increasingly hostile Ukraine, many Right Sector supporters joined nationalist volunteer squads such as the Azov Battalion and the Ukrainian Volunteer Corps (DUK), all-volunteer far-right paramilitary detachments, whose battle insignia is the Social-National Assembly logo, the altered Wolfsangel. While millions in Ukraine, Russia, and throughout the world pray quietly for peace following the September ceasefire talks, Azov Battalion commander Andriy Biletskiy stated that any “attempt to reach an agreement concerning Ukrainian soil with separatists [is] obviously…a betrayal," according to the BBC.

#Azov: what are we supposed to say, we hate your views, go home? http://t.co/OnV5JlUi1X pic.twitter.com/oRVI2rTLJy

Since ultra-nationalists have become a heavy armed military force, the question remains if the Ukrainian policy-makers will be able to maintain control over the ugly genie they let out of the bottle.