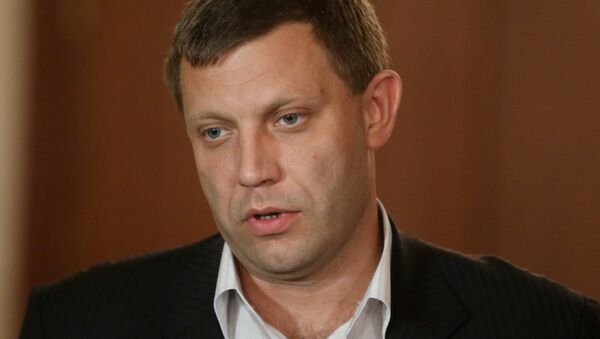 "Yesterday the airport [of Donetsk] was attacked twice, and three times on Saturday. This night [it was attacked] three times. As we can see, [the shootings] tend to decline," Zakharchenko said.

According to Zakharchenko, the self-defense forces do not open fire first, but respond when Kiev troops start bombing cities.

"We do not open fire first, only in response. But we are not going to let the shelling of our cities go unpunished," Zakharchenko stressed, noting that the hot spots of violence in DPR are located in the region of the Donetsk Airport and in the city of Debaltseve.

Zakharchenko noted that he was going to meet with Ukrainian government representatives later on Monday to discuss the recent shelling incidents.

On Saturday, Zakharchenko announced that a "silence regime" was going into effect in the Donetsk region. He added that the pullout of artillery and military hardware would begin after the "silence regime" holds for five days.

An armed conflict in Ukraine's southeast began in April when Kiev launched a military operation against independence supporters in the region. Almost 3,700 people have been killed and over 8,800 have been wounded since the start of the operation, according to the latest UN estimates.

On September 5, the two conflicting sides agreed on a ceasefire during a meeting in Minsk of the trilateral Contact Group on Ukraine. Both parties have subsequently accused each other of violating the ceasefire.