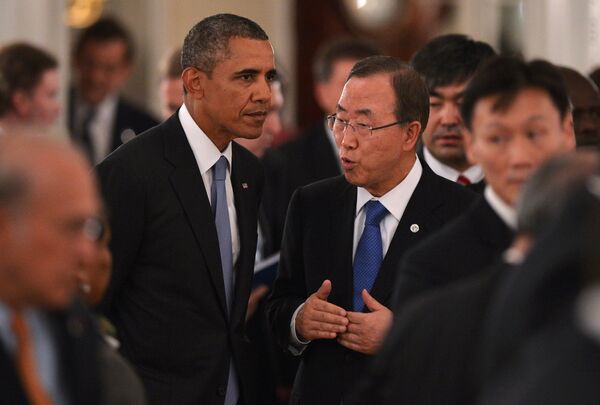 United Nations Secretary General Ban Ki-moon and US President Barack Obama called for the international community to step up efforts to battle the Ebola epidemic in West Africa, the White House said Monday.

"Both leaders agreed that, given the threat posed by Ebola, at this crucial juncture members of the international community must redouble their resolve and commitment to stay the course and decisively address the Ebola crisis," the White House said in a readout of Obama's call with Ban Ki-moon.

The US president "stressed the need for all UN member states to support the UN appeal, and to provide the personnel, equipment, and supplies, required to stop the epidemic at its source and halt the devastating impact of this crisis on the affected countries and their citizens".

The Ebola epidemic in West Africa broke out in southern Guinea in February, and later spread across Liberia, Sierra Leone, Nigeria, and Senegal. According to the latest World Health Organization (WHO) estimates, the death toll from the epidemic has surpassed 4,000. There is currently no officially approved cure for the Ebola virus disease, however, several nations, including Russia, the United States, the United Kingdom and Japan are working to develop vaccines.