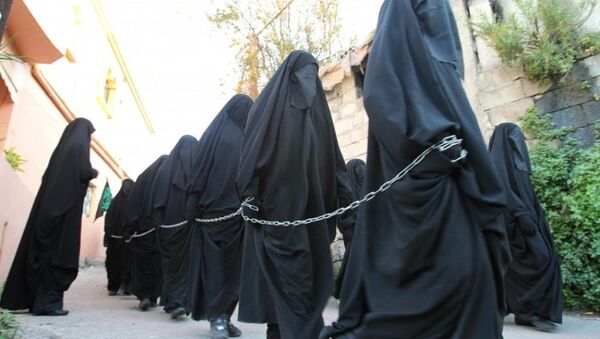 Hundreds of people from the Yazidi minority held captive by the Islamic State (IS) in detention facilities in Syria and Iraq are subjected to brutality, girls and women are forced to marry IS fighters, according to a Human Rights Watch (HRW) report published Sunday.

MOSCOW, October 12 (RIA Novosti) — Hundreds of people from the Yazidi minority held captive by the Islamic State (IS) in detention facilities in Syria and Iraq are subjected to brutality, girls and women are forced to marry IS fighters, according to a Human Rights Watch (HRW) report published Sunday.

"We heard shocking stories of forced religious conversions, forced marriage, and even sexual assault and slavery, and some of the victims were children," special adviser at HRW, Fred Abrahams, was quoted as saying in the report.

"The Islamic State's litany of horrific crimes against the Yazidis in Iraq only keeps growing," he stated.

The HRW interviewed two detained women by phone and 16 Yazidis who escaped from the detention centers. They reported that the group forced young women and teenage girls to separate from their families and marry IS fighters, while the boys were taken away.

Some of the women and girls said they had experienced violent sexual attacks but none of those interviewed reported rape. According to the report, one woman said she saw Islamic State fighters buying girls while one teenage girl said a fighter bought her for $1,000.

"I saw them take all of them, about 10 young women and girls [on different days]. Some were as young as 12 or 13, and up to age 20. Some they had to pull away with force. Some of the young women were married but without children, so they [IS] didn't believe they were married," one witness, Naveen, who escaped in early September with her four children told the HRW, adding that the women were even given gold as dowry.

When the IS first captured the Yazidis during the group's offensive in northwest Iraq on August 3, 2014 they were kept together but later separated into categories defined by age and gender.

The total number of victims remains unknown amid the ongoing fighting but a Yazidi activist told the HRW that many have escaped and remain in hiding.

However, according to other 76 displaced Yazidis interviewed by the HRW in September and early October, the IS were holding a total of 366 of their family members. The 16 who escaped said there were more than 1,000 Yazidi captives.

According to the United Nations and regional officials, more than 500,000 Yazidis and other religious minorities have fled IS attacks in northern Iraq since June.

Early in September, US President Barack Obama unveiled a strategy to defeat the IS insurgency by creating an international anti-IS coalition and conducting airstrikes against IS targets in Iraq and Syria.