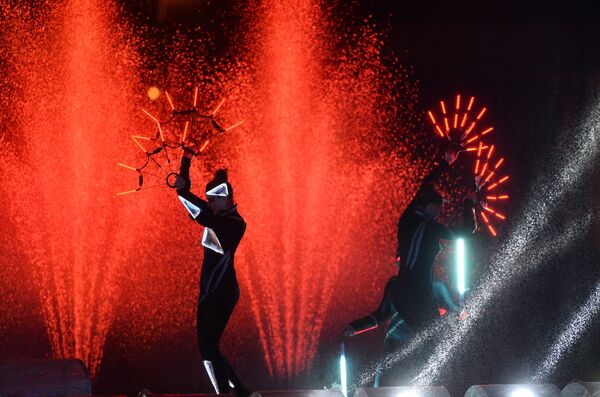 The fourth annual international “Circle of Light” festival opened at the Ostankino Pond Square on Friday.

“This celebration brought together tens of thousands of foreign tourists; it will be enjoyed by millions of Muscovites and hundreds of millions of television viewers. The best artists from around the world came together to prepare for this festival. They will show their artistry in making this autumn evening a colorful one,” said Moscow Mayor Sergei Sobyanin, who came to the event.

The mayor noted that the opening display was only “just the beginning,” as the city has plans to improve the lighting of hundreds of streets, pedestrian zones and facades of historical buildings.

Moscow’s international Circle of Light festival is an annual event in which lighting designers and professionals in the field of 2D and 3D graphics use the architectural spaces of Moscow as objects for multimedia lighting installations.

According to organizers, this year’s central theme is “a trip around the world” –designed to combine the significant places and attractions of the Russian capital through a multimedia show, including Ostankino, the VDNKh, the Bolshoi Theater and the Tsaritsyno Museum and Nature Reserve. Video installations will also appear on the Kuznetskiy Bridge, and the Red October Confectionary Factory. Three themes include “classic”, “modern” and “VJ”. The classical theme will use traditional architectural lighting facades, while the modern theme will present new lighting possibilities. This year’s festival will be the largest yet. Since 2011, the number of sites has more than doubled, from three to eight.

The closing ceremony will take place in front of the Bolshoi Theater.

Organizers note that entrance to the festival is free of charge, and expect about six million visitors. The program can be viewed from 7:30pm to 11pm between October 10 to 14.