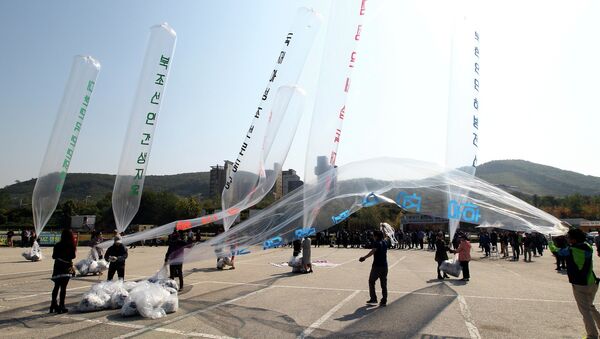 The leaflets call for “freedom and democratic unification” and an end to “Kim Jong-un’s three-generation power transition,” the source notes.

The activists, many of them North Korean defectors from the conservative civic group Fighters for a Free North Korea, launched the balloons despite the South Korean Unification Ministry’s requests to cancel the event, which coincides with the 69th Party of Korea, the Korea Times reported.

Despite the request, the government did not take any measures to stop the group, although a heavy police presence of some 370 officers was noted at the launch site. A South Korean Unification Ministry official told reporters on condition of anonymity that “the issue is something that the leaflet-scattering group should decide for themselves,” Yonghap said.

The leaflets were ostensibly launched in commemoration of the fourth anniversary of the death of Hwang Jang-yop, a high ranking North Korean official who defected to the south in 1997. Hwang was one of the founders of North Korea’s official Juche ideology; Juche translates as “self-reliance”, and embodies the concept that that the masters of a social revolution are the masses of the people, and that they are also the motivating force behind the revolution. He was eulogized in the leaflets for his “lifetime goal of liberating North Koreans and democratizing the country,” the source noted.

North Korea’s Central News Agency (KCNA) blasted the campaign, calling the activists “riff-raff” and “scum”, and dubbing their actions “psychological warfare” which would hurt “the dignity and social system of the DPRK.”

The KCNA also called the campaign a “last-ditch effort to chill the hard-won atmosphere of improving north-south relations,” ostensibly referring to recent attempts to improve relations between the two countries after a high-ranking North Korean official visited the closing ceremony of the Asian Games in South Korea. Talks between officials had resulted in an agreement to hold a round of high-level talks, which are meant to take place sometime between late October and early November.

South Korean activists are known to regularly launch balloons carrying literature, transistor radios, DVDs, and even Choco Pies to the north. The South Korean government occasionally dissuades them from carrying out their plans, usually when tensions are extra high. This time the KCNA statement noted that the launch threatens to put a halt to improving relations, stating that it may have proven recent discussions to have been “empty talk.”

Renewed tensions due to the launch come in the midst of rumors of instability in the North Korean leadership, following long-standing speculation over Kim Jong-un’s poor health, and his failure on Friday to appear at celebrations commemorating the 69th anniversary of the ruling party’s founding.