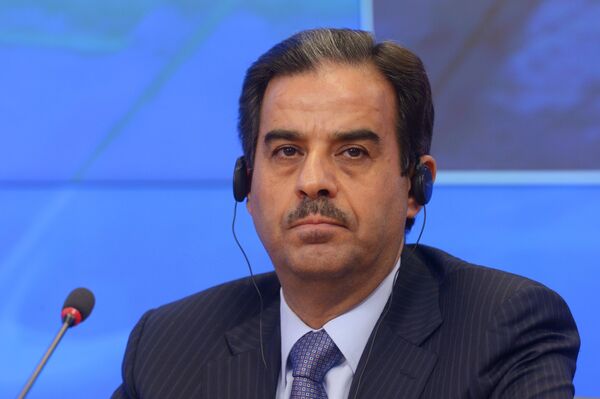 © RIA Novosti . Vladimir Trefilov
/
Go to the photo bank
Subscribe
Lebanon is interested in a resolution of the situation in Syria, but it is keeping a distance from the Syrian crisis, Lebanon's Ambassador to Russia, Chawki Bou Nassar, told RIA Novosti Friday.

MOSCOW, September 10 (RIA Novosti) – Lebanon is interested in a resolution of the situation in Syria, but it is keeping a distance from the Syrian crisis, Lebanon's Ambassador to Russia, Chawki Bou Nassar, told RIA Novosti Friday.

"It is in Lebanon's interests to find a political solution to the crisis [in Syria] as soon as possible. The crisis is having a negative impact on the economic and social situation in Lebanon. There are almost 500,000 Syrian refugees in Lebanon, who are harming the Lebanese economy and infrastructure," the ambassador noted.

Nassar also said that "there is no doubt that the Syrian crisis has affected the fragile situation in Lebanon".

Anti-government protests broke out in Syria in March 2011, leading to a civil war, which has been going on in the country for three years. According to UN estimates, the conflict has claimed the lives of over 190,000 people, forcing almost three million Syrians to flee the country.

The IS has been fighting against the Syrian government since 2012 and has recently launched attacks against the Lebanese Hezbollah movement on the Syrian-Lebanese border.

Hezbollah, which is a paramilitary and political organization originating in Lebanon's Shiite population, has been fighting the IS since the very beginning of the Syrian crisis, having sided with the government of Syrian President Bashar Assad in the battle against extremism.

Moscow has condemned the rise of terrorism in Syria, but Russia has stressed that rather than call for Syrian President Bashar Assad to step down, the West should focus on trying to find a peaceful solution to the Syrian crisis.