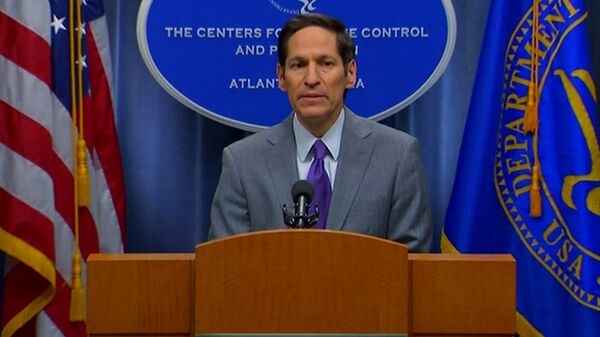 An exclusive survey conducted by NBC News revealed the majority of Americans support banning all flights to the United States from Ebola-hit countries, the news agency reported Thursday.

According to the NBC survey, some 58 percent of respondents believed the United States should impose a travel ban on flights from Liberia, Guinea, Sierra Leone, Nigeria, Senegal, and the republic of Congo currently battling the Ebola epidemic, while 28 percent were opposed to the proposal.

The survey also found that 51 percent of respondents said they were worried there would be an Ebola outbreak in the United States, and by a 2-1 margin those polled disapproved of sending US troops to West Africa to aid in containing the epidemic.

Some 73 percent approved of screening passengers for Ebola at US airports while 60 percent thought the United States should take a more active role in preventing the spread of the disease.

On Wednesday, the Federal Centers for Disease Control and Prevention and US Customs and Border Protection announced new screening procedures at five American airports at the highest risk of the virus: New York's JFK International Airport, Washington Dulles, Newark, Chicago O'Hare and Atlanta. Passengers arriving from Ebola-stricken countries will be questioned and examined by staff for signs of the illness. Some 150 passengers arrive from Guinea, Liberia and Sierra Leone to the United States each day, according to officials.

The survey questioned some 1,010 US adults and was weighted for age, race, sex, education and region to match US Census data.

NBC conducted the survey on Tuesday, a day before the death of Texas Ebola Patient Thomas Eric Duncan. Also in the United States, NBC News freelance camera operator Ashoka Mukpo is being treated for Ebola at the Nebraska Medical Center in addition to an unnamed American doctor who is being treated at Emory University Hospital in Atlanta.

The Ebola outbreak has infected 8,033 people and killed some 3,865 according to the World Health Organization, though numbers are likely to be an underestimate.