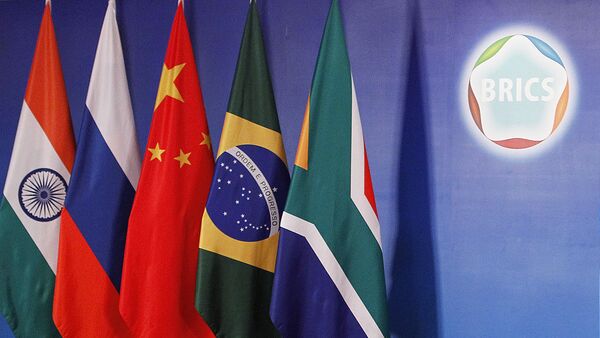 © RIA Novosti
Subscribe
China's economy has outperformed the US by a key measure and has become the largest in the world, whilst BRICS and MINT emerging economies have toppled the G7 group of developed nations, according to the International Monetary Fund.

MOSCOW, October 9 (RIA Novosti), Ekaterina Blinova - China's economy has outperformed the US by a key measure and has become the largest in the world, whilst BRICS and MINT emerging economies have toppled the G7 group of developed nations, according to the International Monetary Fund.

"The new attempts to measure GDP also confirm that, in PPP terms, China is now the world’s largest economy, overtaking the US. At market exchange rates, the US economy is worth $17.4 tn and the Chinese $10.4 tn. With an adjustment for relative prices, China's economy moves up to first place, with a GDP of $17.6 tn," reports the Financial Times.

The "purchasing power parity" (PPP) theory aims to assess and compare the economic performance of nations. “PPPs attempt to capture the fact that a dollar will buy you more or less in different countries,” The Financial Times explains.

China has outpaced the US faster than predicted, the Christian Science Monitor points out. While China has achieved rapid and steady growth in the last decade, America's economy had demonstrated weak performance due to the Great Recession of 2007-09.

However, the media outlet stresses that living standards in the US are relatively still higher and Americans are "much better off, on average" than China's populace. "The GDP per person in China will be $12,893 this year, the IMF estimates, compared with $54,678 in the US," writes the Christian Science Monitor, adding that both figures are adjusted for PPP.

While China's economy "is not without challenges," IMF experts predict that China's economy will continue to prosper and extend its lead.
"China – whose wealth has accelerated in recent decades amid rapid industrialization – is expected to extend its lead, with the IMF estimating its economy will be worth £16.7trillion ($27 trillion) in 2019. That would be 20 per cent bigger than the US economy, which is forecast to be worth £13.8 ($22.31 trillion) by then," the Daily Mail reports.

Meanwhile, a "hypothetical new G7" power, comprised of the BRICS (i.e., Brazil, Russia, India, China and South Africa) and MINT (i.e., Mexico, Indonesia, Nigeria and Turkey) economies, is toppling the G7 group of industrialized nations, notes the Financial Times. The combined GDP of these emerging economies has exceeded that of the "old G7" (i.e., Canada, France, Germany, Italy, Japan, the UK and the US) with PPP-adjusted totals of $37.8 tn and $34.5 tn, respectively.

Financial Times analysts stress that although the PPP method is not exceptionally accurate, such economic trends depict a significant shift in the global economic landscape: Emerging economies are challenging the global status quo.