US Deploys 100 Marines to Liberia to Fight Ebola Outbreak: Department of Defense 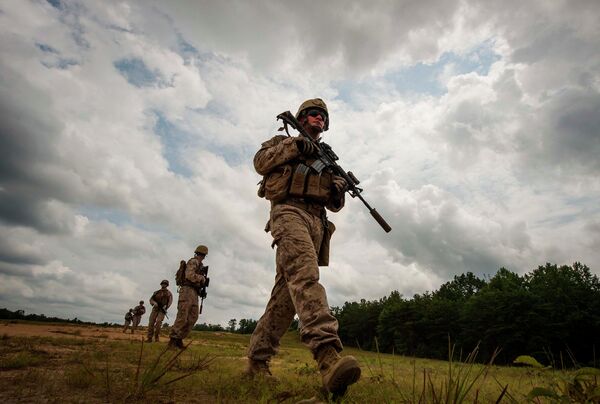 © Flickr / US Marine Corps / Staff Sgt. Ezekiel R. Kitandwe
Subscribe
One hundred members of the US Marine Air Ground Task Force are being sent to Liberia to provide interim re-supply and transportation support in the wake of the Ebola virus outbreak, the Department of Defense (DoD) announced Wednesday.

WASHINGTON, October 9 (RIA Novosti) - One hundred members of the US Marine Air Ground Task Force are being sent to Liberia to provide interim re-supply and transportation support in the wake of the Ebola virus outbreak, the Department of Defense (DoD) announced Wednesday.

"They are being sent down there as a bridging capability," DoD Spokesman, Rear Admiral John Kirby, said.

The Marines are being sent ahead of the US Army team slated to be deployed to Liberia later this month to battle the Ebola virus outbreak.

"We don't see the deployment of these Marines as being long term. They are considered a temporary solution just to get us into the region," Kirby said.

Kirby noted that the Marines are laying the groundwork for the estimated 4,000 troops that are expected to be in West Africa to help with the Ebola fight. Kirby also said the number of troops being sent would remain in flux.

According to Kirby, the Army will be deployed from various installations, providing engineering, medical, civil affairs, aviation, and logistical support to this very important mission.

The Ebola epidemic currently taking place in West Africa broke out in southern Guinea in February, and later spread across Liberia, Sierra Leone, Nigeria, and Senegal. According to the World Health Organization (WHO), the death toll from the epidemic has surpassed 3,800.