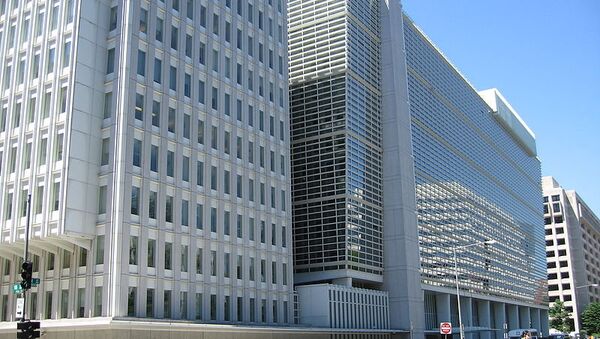 The World Bank has published the “Africa’s Pulse” report today, in which the international lender predicted the African economy to expand at a moderate pace with regional growth to accelerate from 4.6% in 2014 to 5.2% in both 2015 and 2016, only in case Ebola and terrorism threats do not spread further.

MOSCOW, October 8 (RIA Novosti) - The World Bank has published the “Africa’s Pulse” report today, in which the international lender predicted the   African economy to expand at a moderate pace with regional growth to accelerate from 4.6% in 2014 to 5.2% in both 2015 and 2016, only in case Ebola and terrorism threats do not spread further.

Ebola may cost the region of West Africa more than $33 billion in damage to economy by late 2015 if the virus is not stopped very soon, the World Bank says. The epidemic has a potential to affect an even broader region in West Africa.  If the disease is not curbed now, nations like Liberia and Sierra Leone may fall into recession. “The economic impacts are already very serious in the core countries—particularly Liberia and Sierra Leone—and could become catastrophic”, the international lender reports.

However, the long-term effects of Ebola are not yet evaluated, the World Bank warns. “This analysis doesn't take into account the longer-term impacts generated by mortality, failure to treat other health conditions due to aversion behavior and lack of supply capacity, school closings and dropouts, and other shocks to livelihoods”, the lender says, also noting that the long-tern economic effects of Ebola are likely to be negative.

The second largest threat to Africa’s economic growth Is terrorism, the World Bank says. “Downside risks that require enhanced preparedness include … economic fallouts from the activities of terrorist groups such as Boko Haram and Al Shabaab”, Francisco Ferreira, the World Bank’s Chief Economist for Africa says as quoted by Standard Digita.

Africa still remains commodity-dependent, the World bank states, as “primary commodities continue to account for three-quarters of Sub-Saharan Africa’s total goods exports, and the share of the region’s top five exports in total exports has climbed to 60 percent in 2013 from 41 percent in 1995”. Other risks to Africa’s growth are mostly economic, such as increasing fiscal deficits in a number of nations, imbalances in regional development caused by the cooling of the South African economy. Another huge factor is the common problem that most countries do not have an efficient industrial manufacturing sector, as traditional agriculture and mining dominate and the finance sector is only now emerging.

The World Bank also says that a good way for African nations to expand their manufacturing base would be “boosting its fundamentals - business climate, macro-economic stability, reliable and affordable energy, lower transport costs and a more skilled labor force - which will benefit all sectors”.
The Africa’s Pulse analytical report is issued by the Washington-based World Bank twice a year and outlines the current economic trends in African countries.