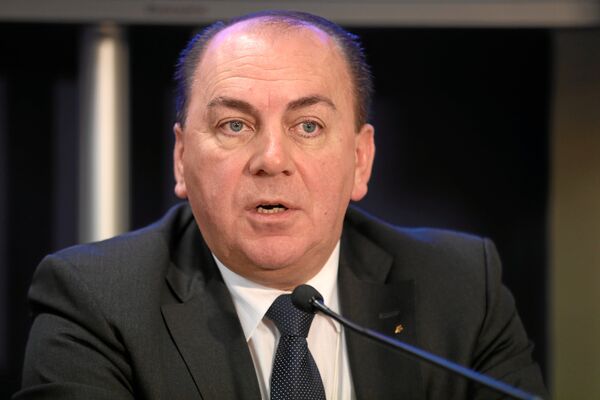 © Flickr / World Economic Forum
Subscribe
The impact on Germany of deeper sanctions against Russia could result in flat economic growth over the next 18 months, the chairman of the Swiss bank UBS, Axel Weber said on Wednesday.

WASHINGTON, October 8 (RIA Novosti) -The impact on Germany of deeper sanctions against Russia could result in flat economic growth over the next 18 months, the chairman of the Swiss bank UBS, Axel Weber said on Wednesday.

"I think going forward if there is a full-fledged...Cuban, Iran type of embargo, expect German growth to be flat both in '14 and '15 ," warned Weber during his speech on the global economic outlook at the Peterson Institute. "So for the next one and a half years, with [German] growth being penciled in at 1.4 percent, if the entire Russian exports disappear, that will be a challenging environment in Germany," he added.

Weber told RIA Novosti that following the unrest in Ukraine and Crimea's rejoining the Russian Federation, Germany "put itself at the core of the sanction regime against Russia." German exports to Russia account for approximately 1.4 percent of the country's GDP, according to Weber. In the second quarter, the impact of the sanctions, Russian embargo, and military conflict in Ukraine knocked one third of those exports off the state's balance sheets.

While German Chancellor Angela Merkel has argued that she is not considering lifting the sanctions regime, a number of German businesses have called for relief.

According to recent statements from Russian Foreign Minister, Sergei Lavrov, it will be up to the nations in the West who imposed the sanctions to decide whether or not to lift them. In the meantime, Russia will continue to work towards the settlement of the conflict in Ukraine as prescribed by the Minsk agreements.

Relations between Russia and the West have deteriorated amid the crisis in Ukraine, as western politicians and media have repeatedly accused Russia of meddling in Ukraine's internal affairs and aiding the independence supporters of the country's southeast. The United States and its allies have introduced several rounds of economic sanctions against Russia. In August, Moscow responded to the restrictive measures, implementing a one-year ban on certain food imports from the countries that imposed anti-Russian sanctions.