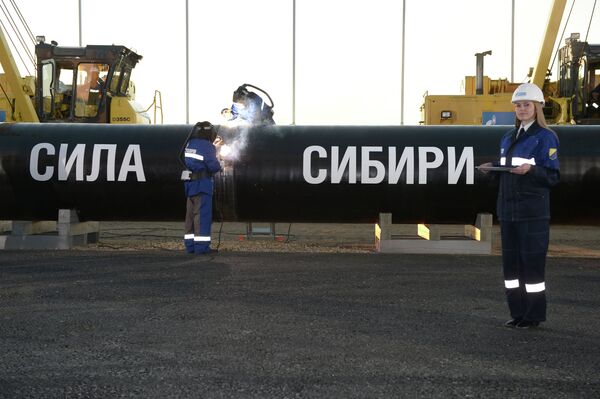 The Chinese Vice Foreign Minister expressed hope that there would be progress in the construction of the western route gas pipeline this year, in a press briefing Wednesday.

MOSCOW, October 8 (RIA Novosti) - The Chinese Vice Foreign Minister expressed hope that there would be progress in the construction of the western route gas pipeline this year, in a press briefing Wednesday.

"Chinese and Russian energy departments are busy with negotiations on the construction of the West Route gas pipeline. We believe there will be progress this year," Xinhua quoted Chinese Vice Foreign Minister Cheng Guoping as saying.

On Saturday, Russian Energy Minister Alexander Novak said the agreement on the supply of Russian gas to China via the western route may be achieved before the end of the year if the circumstances were favorable. The contract may be signed at the APEC summit, in Beijing in November.

Discussions on the export of Russian to China via the western route were brought on by a contract signed between Russia's gas giant Gazprom and China National Petroleum Corporation (CNPC) in May. In the contract the sides agreed on the annual export of 38 billion cubic meters of Russian gas via eastern route to China for a 30-year period starting from 2018. Eastern Siberia's Chayandin and Kovyktin gas fields will be the major sources for these gas supplies. The gas will be delivered by branches of Power of Siberia pipeline.

The construction of the 3,000-kilometer (1,860-mile) Power of Siberia pipeline was launched in Yakutia on September 1. According to Russian President Vladimir Putin, the new gas pipeline will significantly strengthen Russia's economic cooperation with the governments of the Asia-Pacific region, particularly with China.