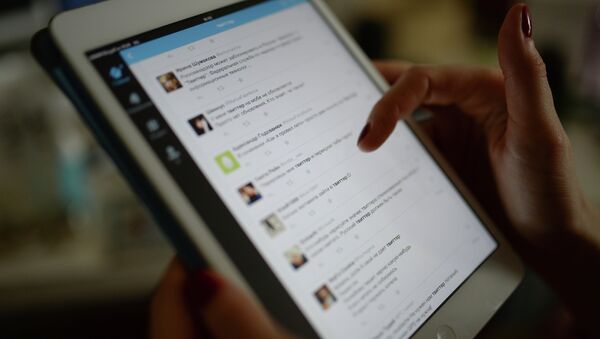 © RIA Novosti . Alexander Kryazhev
/
Go to the photo bank
Subscribe
The US State Department's Center for Strategic Counterterrorism Communications (CSCC) is conducting public diplomacy, not information warfare against the Islamic State (IS) and other terrorist organizations by contesting the space of digital communication and challenging extremist propaganda, the CSCC coordinator told RIA Novosti on Tuesday.

WASHINGTON, October 7 (RIA Novosti) - The US State Department's Center for Strategic Counterterrorism Communications (CSCC) is conducting public diplomacy, not information warfare against the Islamic State (IS) and other terrorist organizations by contesting the space of digital communication and challenging extremist propaganda, the CSCC coordinator told RIA Novosti on Tuesday.

"It is 100 percent overt public diplomacy as the US government has been doing over decades. Everything we do is overt," Alberto Fernandez told RIA Novosti when asked if he considered the CSCC mission to be information warfare. Speaking of the CSCC efforts to counter terrorist and extremist messaging on the internet, he continued, "That's why we're seeking to contest the space, to unnerve the adversary, to change the conversation."

The CSCC is one of the newest offices at the State Department, set up in 2011 to handle the growing capabilities of terrorist and extremist organizations to communicate through the internet and social media platforms. The team, responsible for the mission, is drawn from multiple government agencies, including the Department of Homeland Security, the CIA, the Department of Defense, the Treasury Department, and of course, the State Department, according to Fernandez. While officials have begun messaging and producing videos in English in 2012, the majority of the CSCC messaging is in Arabic.

Many US strategists have shifted focus to countering extremist ideologies, as the Islamic State has gained recruits from over 40 countries around the globe. Asked by RIA Novosti whether US military strikes aid in the recruitment of terrorists, in Iraq and Syria, for example, Fernandez contested the argument. "There were no drone strikes on 9/11. There were no Guantanamo or Abu Ghraib on 9/11. There's always going to be some reason the extremists say they're doing something. They're always going to have an excuse," he said.

Recently published videos by the Islamic State, showing the beheading of western captives, has raised awareness of the extensive use of the internet by IS militants and other radical jihadi groups to recruit foreign fighters and spread their ideology to a potential worldwide audience.