If Minsk Agreement is Fully Implemented, US Could Lift Sanctions Against Russia: Official 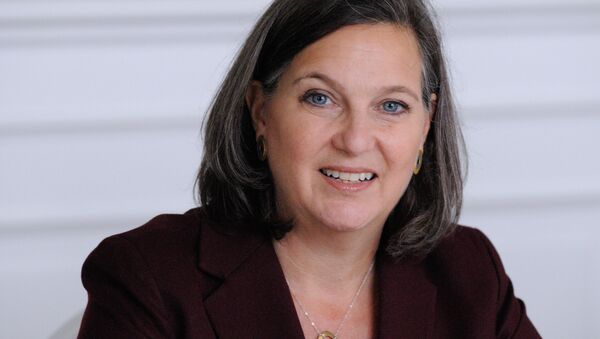 © Sputnik / Alexandr Maksimenko
/
Go to the photo bank
Subscribe
US Assistant Secretary of State for European and Eurasian Affairs Victoria Nuland confirmed Tuesday that if the Minsk agreements are fully implemented, the United States could lift a number of sanctions against Russia.

MOSCOW, October 7 (RIA Novosti) – US Assistant Secretary of State for European and Eurasian Affairs Victoria Nuland confirmed Tuesday that if the Minsk agreements are fully implemented, the United States could lift a number of sanctions against Russia.

Speaking at a meeting with the students of the Taras Shevchenko National University of Kiev, Nuland said the United States could cancel some of the sanctions it had imposed against Russia if the Minsk agreements are fully implemented and if both sides of the Ukrainian conflict observe the ceasefire.

The conflict in Ukraine started in April, when Kiev authorities launched a military operation against independence supporters in the southeastern regions of the country.

On September 5, a ceasefire agreement was signed between the two sides during the meeting of the Contact Group on Ukraine in the Belarusian capital, Minsk. The meeting was attended by representatives from Russia, Ukraine and the Organization for Security and Co-operation in Europe (OSCE).

On September 19, a memorandum was drawn up by the Contact Group, specifying the ceasefire. The memorandum stipulated the creation of a 30-kilometer (18-mile) buffer zone, withdrawal of all heavy weapons from residential areas and the deployment of an OSCE monitoring mission in southeastern Ukraine.

Both the Kiev forces and independence fighters have been accusing each other of violating the ceasefire.

The United States and the European Union have introduced several rounds of economic sanctions against Russia, blaming Moscow for meddling in Ukraine's internal affairs – claims that Russia has repeatedly denied.

On October 3, Nuland said that the United States would be ready to lift some of the sanctions against Russia if the ceasefire agreements reached in Minsk were observed.