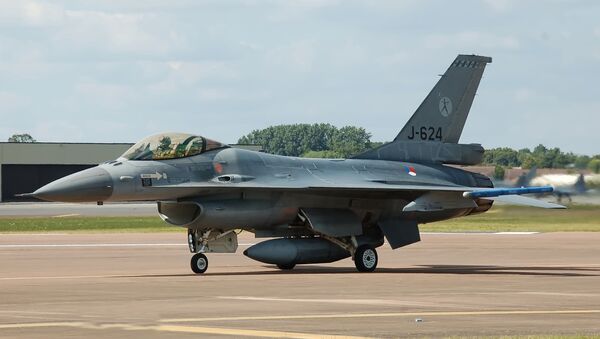 © Wikipedia / Arpingstone
Subscribe
The Royal Netherlands Air Force (RNLAF) carried out its first airstrikes against the positions of the Islamic State (IS) militant group, the Dutch Ministry of Defense said in a statement published on its official website Tuesday.

MOSCOW, October 7 (RIA Novosti) - The Royal Netherlands Air Force (RNLAF) carried out its first airstrikes against the positions of the Islamic State (IS) militant group, the Dutch Ministry of Defense said in a statement published on its official website Tuesday.

"This morning two Dutch F-16s for the first time have used weapons against the ISIS terrorist organization," the statement read.

According to the statement, the RNLAF conducted F-16's first flights on Sunday but no weapons were used.

The IS, also known as the Islamic State of Iraq and Greater Syria (ISIS) or the Islamic State of Iraq and the Levant (ISIL), has been fighting the Syrian government since 2012. In June 2014, the group extended its attacks to northern and western Iraq, declaring a caliphate on the territories over which it had control. Thousands of people, mostly religious minorities, were forced to flee fearing being captured, tortured or killed.

In September, US President Barack Obama announced his strategy aimed at defeating the IS and preventing the terrorism from spreading across the Middle East. A US-led coalition started conducting airstrikes against the IS in Syria the same month in addition to previously authorized strikes in Iraq.

France and Britain are already involved in airstrikes on the positions of the IS. Australia and Canada sent military advisers in Iraq. German paratroopers will assist in the training of Iraqi military.