Europe Acts as Vassal State of Washington in Terms of Sanctions: Former US Official 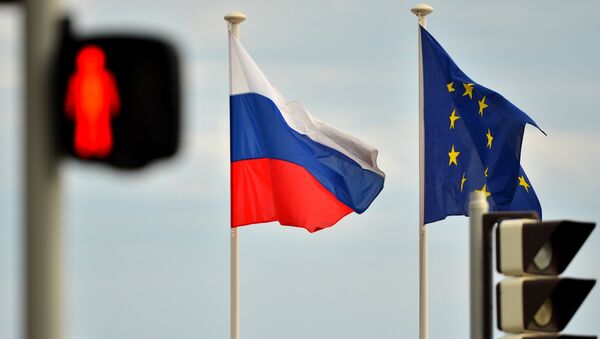 Many questions have arisen questioning Europe's ability to act independently after US Vice President Joe Biden recently announced that the US had forced EU countries to impose economic sanctions against Russia despite the fact that many of them were opposed to such measures.

MOSCOW, October 6 (RIA Novosti) – Many questions have arisen questioning Europe's ability to act independently after US Vice President Joe Biden recently announced that the US had forced EU countries to impose economic sanctions against Russia despite the fact that many of them were opposed to such measures.

The sanctions have more negatively impacted the EU economy, rather than Russia’s, as Russia has other alternative trade partners in the East and in the South American region, said Paul Craig Roberts, former Assistant Secretary of the Treasury in the Reagan Administration, in an interview to Radio VR. He added that the sanctions could have positive effect on Russia’s economic development as they would make “the [Russian] Government realize that the dependency on Washington and the dependency on Europe is a strategic error of the highest magnitude.”

“The Russian Government is beginning to think more carefully and is reorganizing its economic basis away from Europe. That’s the necessary development, as long as Europe acts as a puppet government and a vassal state of Washington,” Mr. Roberts stated.

According to Mr. Roberts, the US government initiated the Ukrainian conflict to distract Russia from the Middle Eastern countries and to diminish its influence in the region. Therefore, the US authorities are not interested in the resolution of the ongoing conflict. “They started the conflict in order to present Russia with troubles that would take the country’s attention away from the American activities in Syria or Iran. And so, there is no prospect of Washington letting the trouble diminish”.

The US government would try to force European countries to impose more and more sanctions against Russia as Washington has a “firm hold” on European countries and is able to convince them to act in compliance with its own interests, Mr. Roberts claimed. However, such a policy of “embarrassment” could also have an inverse effect.

“The problem may be that Washington is pushing its vassal states too hard against their own interests, in which case Washington could cause its vassal states in Europe to breakaway and act independently,”, he said, adding that it would be a positive development “because an independent policy on the part of the Europeans would reduce the chance of a war and […] Washington's ability to intervene in the affairs of sovereign countries”.

The latest EU and US sanctions were introduced against Russia in the second half of September. The sanctions, predominantly targeted the banking, energy and military sectors and are considered misplaced by many political experts, as they don’t correspond with the intention to peacefully settle the ongoing Ukrainian conflict and are disadvantageous for many European countries from the economic point of view.