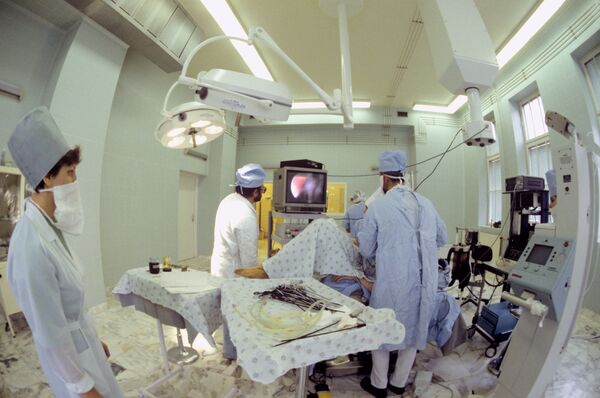 © RIA Novosti . Vitaly Arutunov
/
Go to the photo bank
Subscribe
A 36-year old woman in Sweden, born without a uterus, has been announced as the medical first to give birth to a baby from a womb donated to her by her 60-year old friend, the BBC reported Saturday.

MOSCOW, October 4 (RIA Novosti) - A 36-year old woman in Sweden, born without a uterus, has been announced as the medical first to give birth to a baby from a womb donated to her by her 60-year old friend, the BBC reported Saturday.

"He's no different from any other child, but he will have a good story to tell," the father of the child was quoted as saying by the BBC.

The baby, born prematurely in September, was delivered by caesarean section, with a normal weight for that stage of pregnancy - 1.8 kilograms (3.9 pounds).

The couple, whose identities were not disclosed, underwent the In Vitro Fertilization (IVF) treatments to produce 11 embryos which were frozen. One of the embryos was transferred to the woman's transplanted womb a year later. During the year, drugs to suppress the immune system were being administered to prevent the new womb from being rejected by her body.

"Our success is based on more than 10 years of intensive animal research and surgical training by our team and opens up the possibility of treating many young females worldwide that suffer from uterine infertility," the doctor who headed the transplant team, Professor Mats Brannstrom, was quoted saying by the BBC.

In the meantime, a consultant gynecological surgeon at Queen Charlotte's Hospital in London, Richard Smith, is planning on carrying out similar procedures in the coming year funded by the charity Womb Transplant UK.

According to a report by the Womb Transplant UK, they needed to raise £500,000 ($798,750) to help pay for the final stages of their research before they can "seek ethics approval and secondly to pay for the first five transplant operations".

One of the five British women seeking to attempt the transplant is 28-year-old Sophie Lewis. Aged 16, she was told that she could not deliver a baby naturally because she had no uterus.

"To be given this opportunity is such an amazing thing that I would go through everything and anything just to have the experience," she said as quoted by the Daily Mail earlier last year when research was underway.

As surrogacy remains the only option for women born without a womb, several womb-transplants have been carried out but out of the nine successful transplants done by Dr Brannstrom's team in 2012, this is the first case worldwide of a successfully baby born.