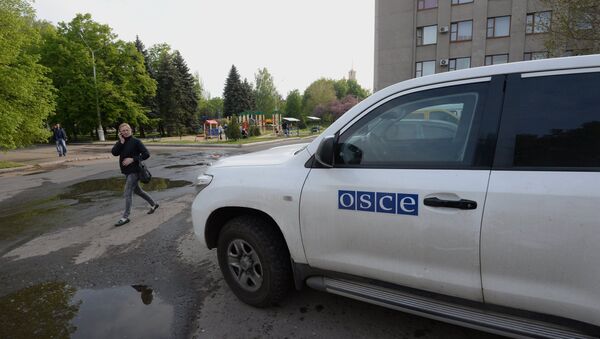 The Trilateral Contact Group on Ukraine has issued a statement according to which the group has observed progress in the de-escalation of the situation in Donbas, though it remains concerned over the ongoing violations of the ceasefire agreement achieved on September 5.

MOSCOW, October 4 (RIA Novosti) - The Trilateral Contact Group on Ukraine has issued a statement according to which the group has observed progress in the de-escalation of the situation in Donbas, though it remains concerned over the ongoing violations of the ceasefire agreement achieved on September 5.

"Having noted a certain progress with regard to the de-escalation of the situation in the region of Donbas, the participants of the meeting express their concern about continuing violations of the cease-fire regime and agreements reached as a result of consultations, such as the Minsk Protocol of 5 September and the Minsk Memorandum of 19 September 2014," reads the statement published on the OSCE's website Saturday.

According to the statement, the group welcomed the opening of the Joint Center on Control and Coordination of issues in Debaltseve, Donetsk Region related to the ceasefire regime and the stabilization of the situation.

"The members of the Trilateral Contact Group express their strong hope that the Joint Center will promote a further de-escalation of the situation in the region of Donbas and ensure the effective control and verification by the OSCE of the existing agreements on compliance with the cease-fire regime, the withdrawal of illegal armed formations and their equipment from the territory of Ukraine, as well as the establishment of an effective control over the Ukrainian-Russian border," the statement concluded.

The self-proclaimed Donetsk and Luhansk people's republics in eastern Ukraine held referendums this May on self-determination. Over 90 percent of the voters cast their votes for greater autonomy. The republics declared themselves sovereign states as a result.

On September 5, the Trilateral Contact Group on the situation in Ukraine met in Minsk. The group consists of representatives from Russia, Ukraine and the Organization for Security and Cooperation in Europe (OSCE). As a result of the meeting, the Kiev authorities and the self-proclaimed people's republics of Luhansk and Donetsk agreed on a ceasefire, which took effect on the day. The sides also agreed to an international monitoring, exchange of prisoners and the opening of humanitarian corridors.

On September 19, a memorandum was drawn up by the group to include nine provisions that would implement the ceasefire agreement between Kiev and independence supports in eastern Ukraine.

The ceasefire is for the most part maintained. The sides, however, blame one another for violating it. Reports from DPR claim that the Ukrainian forces are firing shells at residential buildings from the area near the airport of Donetsk, thus forcing the independence supporters to open fire.

According to UN estimates, the conflict has so far killed over 3,600 people and injured over 8,500.