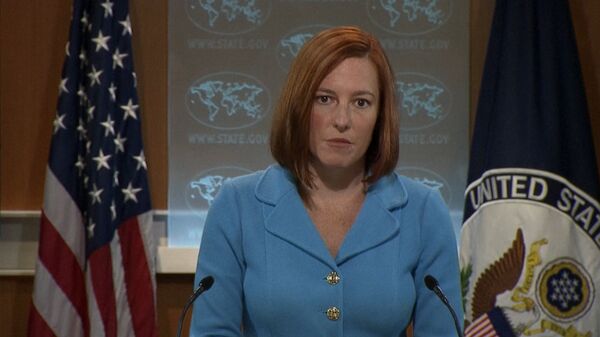 "We call on all parties to take all feasible precautions to prevent the loss of innocent life, comply with international humanitarian law, and respect facilities of humanitarian organizations," Psaki said at a press briefing.

She also expressed condolences to the victims, including the Red Cross employee killed in the deadly shelling in Eastern Ukraine on Thursday.

"In the last 24 hours shelling and attacks have intensified in Eastern Ukraine most notably in the city and the airport of Donetsk," Psaki said, adding that since the ceasefire was signed on September 5 the continued violence had killed over 200 people. "Many of them are innocent men, women, and children. Our thoughts and prayers are with the families of all victims including Red Cross worker Laurent DuPasquier."

Earlier on Friday Moscow called for an unbiased and thorough investigation into the death of a Red Cross humanitarian worker in eastern Ukraine. The Russian Foreign Ministry said in a statement that it had "noted the hasty reaction by the Ukrainian authorities, who hurried to shed all responsibility for the death of a member of this reputed international humanitarian organization."

Late Thursday, the International Committee of the Red Cross (ICRC) confirmed that one of its delegates to Ukraine, Swiss citizen Laurent DuPasquier, was among the victims of the heavy artillery bombardment of central Donetsk.

Moscow condemned the incident as a blatant violation of international humanitarian law and insisted on an objective and thorough investigation into the matter.

Ukraine has been engulfed in a violent internal conflict since mid-April, when Kiev began its military operation against independence supporters in the southeastern regions of the country.

The sides agreed on a ceasefire at a meeting of the Contact Group on Ukraine held in Minsk on September 5. Another meeting of the Contact Group on September 19 resulted in a memorandum, specifying the implementation of the ceasefire and stipulating the creation of a 30-kilometer (18-mile) buffer zone, withdrawal of all heavy weapons from residential areas and the deployment of monitoring mission from the Organization for Security and Co-operation in Europe (OSCE) in southeastern Ukraine.

Since the establishment of the ceasefire regime, the conflicting sides have repeatedly accused each other of violating the agreement. However, the OSCE stated that the truce was generally holding.