Putin: Russia Has Reserves to Implement Budget Plans Regardless of Global Trends 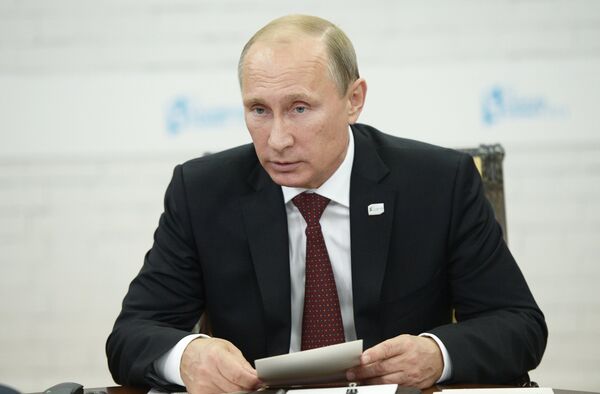 NOVO OGARYOVO (outside Moscow), October 3 (RIA Novosti) - Russia has enough reserves to implement all the tasks under the state budget regardless of global political and economic trends, Russian President Vladimir Putin said Friday.

"We certainly have reserves to resolve the issues that could arise as a result of developments of the situation in the world and in Russia," Putin said at a meeting with Cabinet ministers on import substitution.

On Tuesday, the Russian government presented to the lower house the 2015-2017 draft federal budget, which envisages a deficit of 0.6 percent of Gross Domestic Product. GDP is expected to increase by 1.2 percent next year, and by 2.3 percent the following year. Inflation is forecast to be set at 5 percent next year.

Over the past months, the West has been trying to damage Russia’s economy by implementing several rounds of sanctions against it over Moscow’s alleged role in Ukrainian crisis. The measures target the country's largest banks, energy and defense companies, as well as some individuals.

As a result, Russia’s economy showed a minor slowdown. Inflation rates are expected to increase by 1 percent for the end of 2014.

Earlier this week, Vladimir Putin said that Russian authorities plan to ensure economic growth through structural reforms and added that the fundamental factors necessary for Russia’s economic stability, which include a non-deficit budget, significant reserves, and a stable payment balance, are still strong.