80 Former Nazi SS Members Should Be Found and Convicted of Murder: Wiesenthal Center 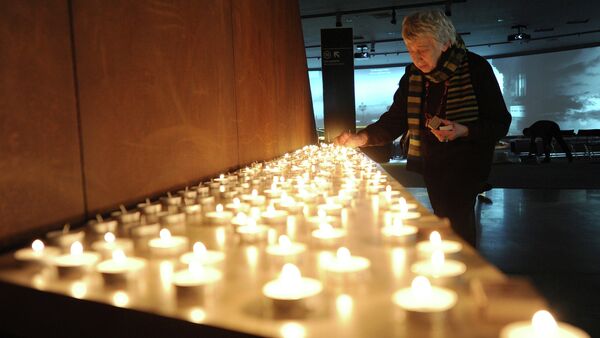 © RIA Novosti . Aleksey Filippov
/
Go to the photo bank
Subscribe
About 80 former members of Nazi death squads may still be alive, the Simon Wiesenthal Center in Jerusalem has revealed, urging the German government to launch an investigation as soon as possible.

MOSCOW, October 3 (RIA Novosti), Ekaterina Blinova - About 80 former members of Nazi death squads may still be alive, the Simon Wiesenthal Center in Jerusalem has revealed, urging the German government to launch an investigation as soon as possible.

"The center's top Nazi hunter [Efraim Zuroff] said the list included 76 men and four women whom it had identified as once-members of the Nazis' SS-led Einsatzgruppen in Eastern Europe. The squads, partly made up of ordinary police officers, murdered more than a million Jews, Gypsies, political opponents and local elites in Poland, the Balkans and the Soviet Union, mainly from 1939 to 1943," the Wall Street Journal reports.

Efraim Zuroff emphasized that he had chosen the 80 members who were the youngest among the estimated 3,000 former Nazi SS members. The ones who were born between 1920 and 1924 might be still alive, Zuroff believes.

"Time is running out," he said, as cited by the Wall Street Journal, "There is no reason to ignore these people just because they are elderly. They also don't deserve any sympathy since they obviously had none to their victims."

The Simon Wiesenthal Center, however, could not find out the exact locations of the suspects and confirm if they are still alive because of Germany's privacy laws, the Associated Press points out.

According to Germany's justice spokesperson, the Simon Wiesenthal Center's list had already been forwarded to the special German agency which is responsible for investigating Nazi war crimes.

"This is a new chapter in examining these groups," said Kurt Schrimm, head of the special agency, as quoted by the Wall Street Journal.
However, he pointed to the fact that it would not be easy to track down all the suspects.

"We don't have a central population register in Germany, as people register with local authorities where they live. If we find a commonplace name we will have to check with each German municipality whether somebody with such a commonplace name born in a particular year lives there," Mr. Schrimm explained.

The head of the special agency noted that according to Germany's current legal system, it would be enough to convict the suspects of "accessory to murder" – "even without evidence of participation in a specific crime" – if it was proved that they had served in a Nazi unit.