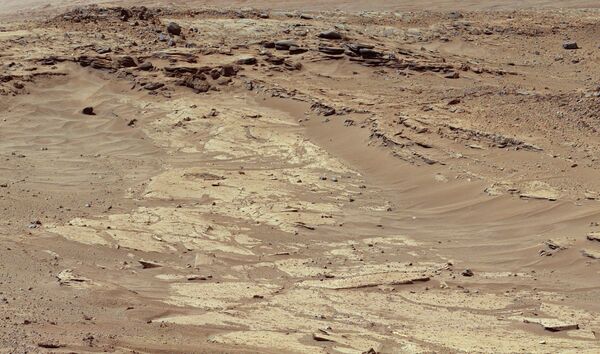 Daily winds on Mars carve out a landscape of shifting dunes, scientists have reported. Their study was published in the journal "Nature Communication".

MOSCOW, October 1 (RIA Novosti) – Daily winds on Mars carve out a landscape of shifting dunes, scientists have reported. Their study was published in the journal "Nature Communication".

"We observed that Martian sand dunes are currently migrating and that their migration speed varies with the season, which is at odds with the common view of a static Martian landscape and very rare sand-moving winds," study co-author Francois Ayoub of the California Institute of Technology's planetary sciences division told AFP.

Wind has long been considered a factor in the Mars’ topography and climate, home of world circling dust storms. But the data on the strengths and frequency of winds has been insufficient.

Ayoub and a joint US-British team of scientists studied the surface evolution of the Red Planet. They believe that saltation – a specific type of particle transport by wind or water – is crucial for erosion of the surface and dust lifting to the atmosphere.

As part of the study, the scientists measured the displacement of sand ripples on a dozen satellite images taken over a 40-square-kilometer (15-square miles) area in the Nili Patera dune field and calculated the wind speed and strength required to move the sand.

"From these measurements, we estimated the sand flux and its seasonal variability," said Ayoub. Next, they calculated the wind speed and strength required to move the sand, and the frequency. Winds on Mars can be strong and can reach hurricane speed (more than 120 kilometres per hour or 75 miles per hour)," Ayoub said.

Wind tunnel experiments along with these measurements suggest that winds should only rarely move sand on Mars. However, the pictures taken from the Mars Reconnaissance Orbiter spacecraft show a massive seasonal sand flux.

Previously, scientists expected that winds strong enough to move sand would rarely be possible on a planet with such a thin atmosphere.

Understanding the characteristics of Mars’ winds would allow scientists to make predictions about the rate of erosion of the landscape and about Martian climate.

It will also aid future rover missions from Earth.