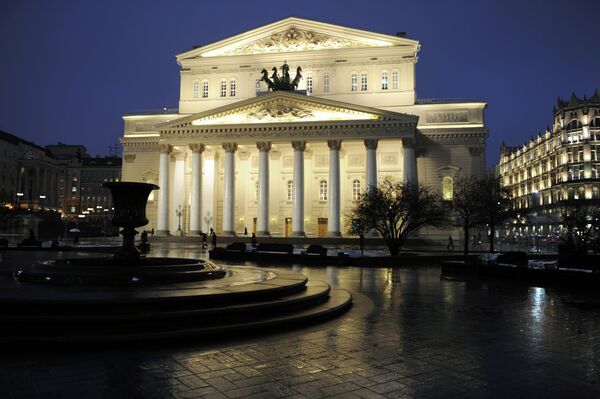 Less is more was the ruling principle for Bolshoi's musical director Tugan Sokhiev at the premiere of Piotr Tchaikovsky's rare opera The Made of Orleans.

MOSCOW, October 1 (RIA Novosti), Nastassia Astrasheuskaya - Less is more was the ruling principle for Bolshoi's musical director Tugan Sokhiev at the premiere of Piotr Tchaikovsky's rare opera The Made of Orleans.

He chose to have no decorations or exquisite costumes in the concert opera, staged at the theatre for the second time in its 239-year history. The telling of the story of France's legendary warrior publicly burned for heresy Joan of Arc lay solely on the voices of several soloists and dozens of choir singers.

Simple white dress, to match the blond hair of the Moscow-born and Zurich-educated soprano Anna Smirnova, contrasting with the black orchestra uniform and the dark brown choir capes, created the angelic look of the main character, whom the composer had great adoration for.

Her first time singing in Russian, Smirnova said she was preparing for one of the most difficult parts for any female opera singer throughout her career.

"I had to spend many years abroad and sing at many theaters before I got the honor to perform in my homeland in Russian, and I have never sung in Russian before," she told journalists ahead of the dressed rehearsal.

"Russian music has always touched my heart, and it is much harder for me dramatically than operas by Italian composers, because I sing in my native language, and I feel every word ten times stronger than when I sing in a foreign language. Singing in Russian is a million times harder," said Smirnova, who mainly performs Italian operas by Verdi.

The singer shared her Bolshoi debut with Sokhiev, who started at the theatre six months ago after serving as conductor at the Mariinsky, Orchestre National du Capitole de Toulouse, and Deutsche Symphonie-Orchester Berlin. He replaced Vassily Sinaisky, who resigned following a series of shake-ups at Moscow's main ballet and opera house last season.

Sokhiev chose The Maid of Orleans to celebrate Tchaikovsky's upcoming 175th anniversary for the great role the piece played in the composer's life, as well as in a step to diversify the theater's repertoire.

"I believe the theatre needs to stage new performances, we need to introduce new composers, as well as to search for names long forgotten. And that is the direction we are taking, and I think the work is interesting," Sokhiev said.

Presenting the opera in the form of a concert - with the orchestra on stage and practically still singers - sped up the preparation process and simplified the performance. The lack of much action compensated for the elaborate high-par libretto, which Tchaikovsky wrote himself afraid no one else would do better justice to the story of Arc. It took him years of work, which paid off when The Maid of Orleans premiered at the Mariinsky Theatre in 1881 to a standing ovation and some 40 callbacks.

The critics, however, disproved the piece at the time leading to its century-long neglect by theaters.

This time, history nearly repeated itself. Local critics called the piece deconstructed and too stilted for modern-day audiences. Yet, the viewers anxious to start the autumn season of nights out at the theatre left more impressed.

"The Maid of Orleans reduced to its minimum - the musical genius of Tchaikovsky," said one of the viewers from Moscow after the performance.

The interest for seeing the unusual performance, the new lead singer and the new conductor at work sold off the two nights of the premiere, on September 26 and 28.

Next, the Bolshoi moves on to the The Story of Kai and Gerda children's opera, which premieres in November.