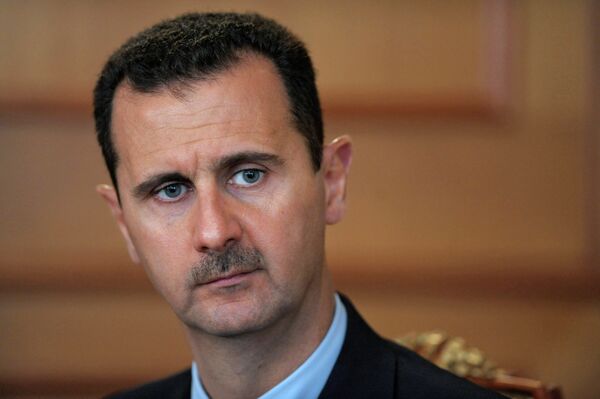 Terrorism in Syria cannot be combated by the countries, which feed it, Syrian President Bashar Assad said Tuesday.

"Combating terrorism cannot be carried out by states that contributed to establishing terrorist organizations, provided them with logistic and material support, and spread terrorism around the world," Syria's SANA news agency quoted Assad as saying at the meeting with the Secretary of the Supreme National Security Council of Iran Ali Shamkhani.

The Syrian leader also emphasized that the fight against the extremist ideology, nurtured by certain regional powers, is as important as combating those who commit actual acts of violence and destroy the historic and cultural heritage.

Iran's Shamkhani reaffirmed Tehran's support for Damascus' war on terrorism and the territorial integrity and sovereignty of Syria.

Syria has been fighting various rebel and extremist groups since the civil war broke out in 2011. The Islamic State (IS) group has seized vast areas across war-torn Syria and Iraq and proclaimed a caliphate in June 2014. Washington launched airstrikes against the insurgents in August, following the group's advance on northern Iraq.

In September, the United States, along with Bahrain, Jordan, Saudi Arabia, Qatar and the United Arab Emirates, launched attacks against the IS and other terrorist groups on the Syrian territory. Washington has said it notified Syria of the attacks, but has not requested any formal permission for military action.