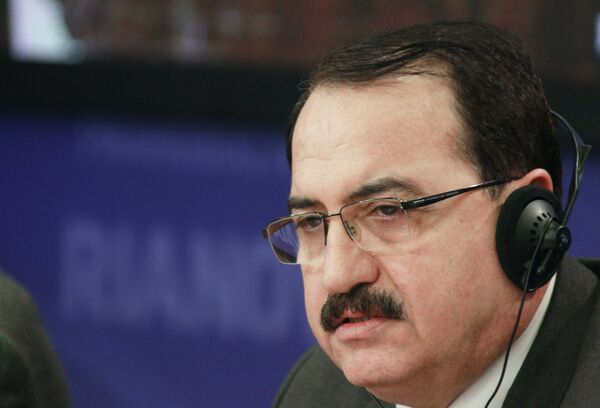 © RIA Novosti . Alexander Natruskin
/
Go to the photo bank
Subscribe
The Syrian ambassador to Russia on Tuesday said that international airstrikes alone are not enough to destroy Islamic State (IS) militants operating in the Middle East and that Syrian ground troops would need to be used in order to completely eradicate them.

MOSCOW, September 30 (RIA Novosti) - Syrian ambassador to Russia Riad Haddad on Tuesday told RIA Novosti that international airstrikes alone are not enough to destroy Islamic State (IS) militants operating in the Middle East and that Syrian ground troops would need to be used in order to completely eradicate them.

"American airstrikes hamper the militants from moving around Syrian territory, but the battle will not be won by airstrikes alone, but the decisive efforts of [Syrian] ground troops," Haddad said.

"When the coalition began bombing in Iraq, the Islamists started running into the eastern region of Syria with their weapons. Bombing is necessary to keep a hold on them, but the battle will only be won by the Syrian Army," Haddad said.

Haddad said that if coalition troops were to hit the ground in Syria to fight the IS militants, then this must be with the consent of the Syrian government.

"If such a step is to happen, then it needs to be fully agreed with the Syrian leadership and is inadmissible without Syria's consent. We cannot guess what will happen, but I'm confident in Syria's sovereignty, unity and the necessity of coordinating the organization of such an operation with Syria's allies if such an operation becomes necessary," Haddad added.

According to the ambassador, Syrian President Bashar Assad has said Syria is ready to cooperate with any international efforts within the UN to fight IS militants operating in the region and supports airstrikes against them within the legal framework.

The United States has formed an international coalition with the goal of fighting the IS. Washington and its allies have already conducted a number of airstrikes on IS positions in Syria and Iraq. Russian Foreign Minister Sergei Lavrov said earlier that the coalition should seek consent of the countries in which the airstrikes are conducted.