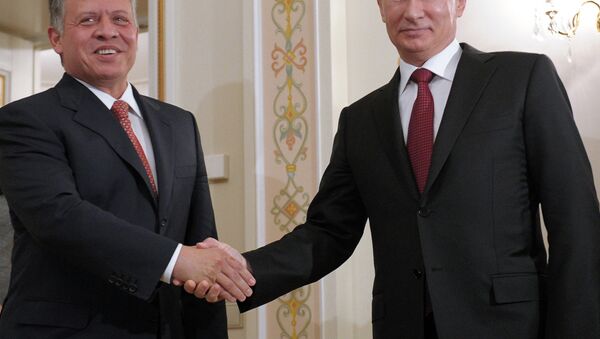 “During the high-level talks, issues on bilateral cooperation, including the perspectives of joint energy, infrastructural and agricultural projects with Russian companies in the Kingdom [of Jordan] are on the agenda of discussion,” a Kremlin statement said.

According to the Kremlin press service, the two leaders will also exchange opinions on regional problems, including the situation in Syria, Libya and Middle East settlement.

Most recently, Jordan has entered a coalition with the United States to roll back Islamic State (IS) threat in the Middle East amid reports that the violent terrorist group has been making gains in Iraq and Syria. Other countries on the anti-IS list are Bahrain, Kuwait, Oman, Qatar, Saudi Arabia, Egypt, Iraq, Lebanon and the United Arab Emirates.

The creation of a coalition was followed by intensified air strikes on the Syrian territory, which have been carried out without the consent of President Bashar Assad's government, prompting Russian Foreign Minister Sergei Lavrov last week to question the legality of US air campaign.