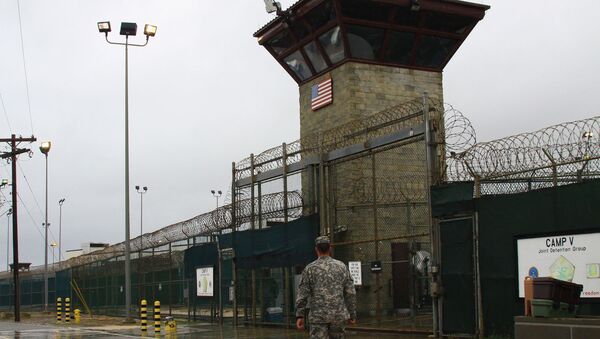 Guantanamo Bay prison will remain open as long as detainees kept in the detention center awaiting approval to be transferred or released from US Department of Defense custody, a taskproving to be a lengthy process, AP reports.

MOSCOW, September 30 (RIA Novosti) - Guantanamo Bay prison will remain open as long as detainees kept in the detention center await approval to be transferred or released from US Department of Defense custody, a task proving to be a lengthy process, AP reports.

The Pentagon claims that it has to carefully review each individual case so as to be sure that those released will not return to terrorism. This undoubtedly takes time. But critics point out that the agency does not seem to be in a hurry despite constant pressure from the White House. Barack Obama first promised to close the notorious prison during his presidential campaign in 2007. He repeatedly said that Guantanamo will be shut down but has failed to deliver on his promise.

“The president would absolutely like to see more progress in our efforts to close Guantanamo,” Lisa Monaco, the president’s counterterrorism adviser, said, as quoted by AP. “He wants it closed,” she stated, adding that Obama is “pushing his own team very hard, raising it weekly with me, with Secretary Hagel, with Secretary (of State John) Kerry.”

The top US official, who ultimately decides whether a prisoner can be transferred or not, is US Defense Secretary Chuck Hagel. In May, Hagel addressed the issue of delayed prisoner transfers from Guantanamo. “My name goes on that document, that's a big responsibility,” he said, as quoted by the New York Times. “What I’m doing is, I am taking my time. I owe that to the American people, to ensure that any decision I make is, in my mind, responsible.”

Paul Lewis, the Pentagon’s special envoy for Guantanamo closure, insisted that Hagel is “absolutely committed to close Guantanamo,” according to AP. Nevertheless, the department is being careful and deliberative in its review process of the detainees, he added.

There are currently 149 prisoners kept at the Guantanamo Bay prison, set up in the aftermath of the September 11, 2001, terrorist attacks on the United States. Dozens of prisoners are approved for transfer but still remain in custody. Only six detainees have been released from the prison this year, including five Taliban members exchanged for US Army Sgt. Bowe Bergdahl.