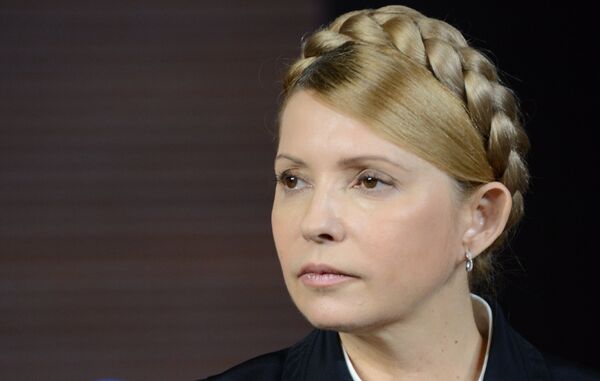 "Time has come to deeply rethink the strategy and policies of real energy diversification. I believe that European countries together with Ukraine have means to limit monopoly of Gazprom to the energy supply to Europe," Tymoshenko said.

"Unfortunately, we are seeing not good things from Moscow," Yulia Tymoshenko said, answering RIA Novosti's question whether the gas war seen in 2009 might repeat this year.

The statement came amid fears of potential troubles with gas transit via Ukraine, which was switched by Russia's energy giant Gazprom to a prepayment system over Kiev's gas debt estimated to be in excess of $5 billion.

On September 26, Russia and Ukraine made preliminary arrangements, according to which, the sides will have to sign the so-called winter package of documents on Russian gas supplies to Ukraine.

Ukraine is a transit country for Russian gas. Around half of the Russian gas imported to the European Union in 2013 crossed Ukraine, which amounts to approximately 15 percent of European consumption, according to the International Energy Agency.

Moscow and Kiev have a long history of disputes over natural gas deliveries. Russia turned off gas supplies through Ukraine in the winter of 2009 after Kiev was late paying. Halting natural gas supplies affected Ukraine's European neighbors. For example, Bulgaria was forced to stop production at some of its industrial plants, while Slovakia declared a state of emergency.