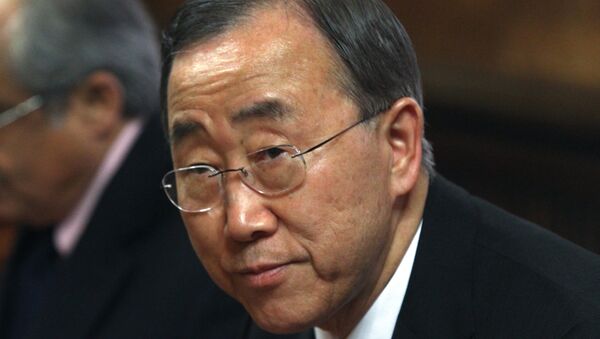 In a statement, issued on Monday, Ban Ki-Moon “congratulates Dr. Ashraf Ghani Ahmadzai on his inauguration as President of the Islamic Republic of Afghanistan. He further extends his congratulations to Dr. Abdullah Abdullah on being sworn in as Chief Executive Officer.”

The UN said Ban Ki-moon “notes the serious challenges, Afghanistan facing and calls for the new government to be formed quickly and to work with all Afghans in a spirit of national unity.” Ban Ki-Monn also “applauds the great determination, patience and strength, demonstrated by the Afghan people, and encourages the new government to uphold these virtues as it moves the country forward.”

The UN concluded that Ban Ki-moon “notes that this is a historic event and reaffirms the continued commitment of the United Nations to support the government and the people of Afghanistan in the new period of transition and beyond.”

After the June 14 run-off election between Abdullah Abdullah and Ashraf Ghani, Abdullah alleged irregularities in pro-Ghani districts. The two candidates agreed on July 12 to an audit of the ballot. This was completed on September 5. Finally, an agreement to make Ashraf Ghani the president and Abdullah Abdullah the CEO was reached.