Leader: Luhansk Expects Next Humanitarian Convoy From Russia Next Month 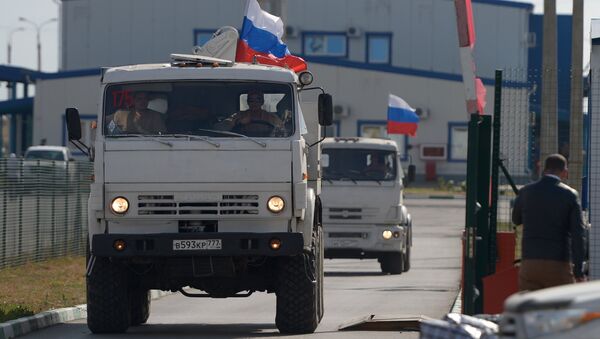 "There is no fixed date so far, but we know that it will take place in October," Plotnitsky told reporters.

On September 24, Russian Deputy Emergencies Minister Vladimir Stepanov said cargo for the fourth Russian humanitarian convoy was being put together, with the date of the convoy's departure to be determined later.

On August 22, the first Russian humanitarian convoy of 280 trucks arrived in Luhansk after a series of delays. The second convoy arrived in Ukraine on September 13, with the third convoy, comprising some 200 trucks, arriving on September 20.

The Ukrainian government has called the humanitarian convoys "provocations" and demanded Russia stop sending them to the regions in conflict.

The civilian population of Ukraine's southeast has suffered greatly from the military confrontation between the Kiev authorities and independence supporters that began mid-April.

A ceasefire agreement was reached on September 5 at a Contact Group meeting on the situation in Ukraine in Minsk. On September 19, the participants of the Minsk talks adopted a memorandum specifying steps for the ceasefire's implementation.